You are here: Home » Blog » News » 10 reasons why Bhutan is so popular with tourists across the world

The tranquil ‘Kingdom of Bhutan’ as Bhutan is officially called is a South Asian country, which lies at the eastern end of the Himalayas and shares its borders with China in the north and with India from its eastern, western and southern sides. The serenity of Bhutan’s capital, Thimphu, which is also the largest city of the country, is extremely calming and will help you get a breath of fresh air far away from the bustling of the metropolitan cities around the world. Bhutan is one of the best places to visit if you’re looking for an unperturbed and rejuvenating holiday. Here are 10 reasons why Bhutan will prove to be a blissful experience.

Religious beliefs/Buddhism: Buddhism is a religion to about 300 million people around the world. More than two-third of the Bhutanese citizens follow Vajrayana Buddhism (also the state religion) and around one-third follow Hinduism, which is the second most dominant religion in Bhutan. People from all over the world come to visit the Bhutanese monasteries. 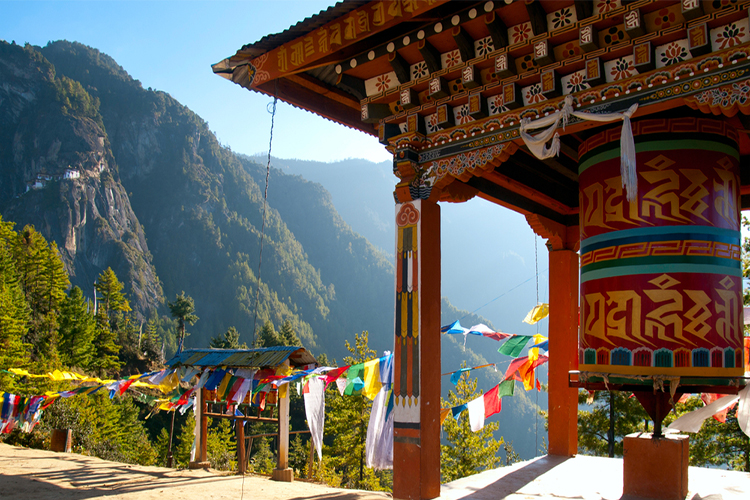 Landscape/Biodiversity: While you travel through Bhutan you will find steep and high mountains crisscrossing by networks of swift rivers. The extra-ordinary geographical diversity and the diverse climate conditions play an important in contributing to Bhutan’s outstanding range of biodiversity and ecosystems, which are worth seeing.

Weather: Bhutan experiences five prominent seasons namely summer, monsoon, autumn, winter and spring. The western part of Bhutan experiences heavier monsoon rains whereas the southern part undergoes hot humid summers and cool winters and the central and eastern Bhutan remain temperate and drier than the west with warm summers and cool winters. Bhutan hence gives the flexibility for you to choose the location and the time of the year to visit, depending upon the preferable climatic conditions.

Tourist attractions: Thimpu has one of the largest statues of Buddha made of bronze and gilded in gold towering over Thimpu in Bhutan and the National Memorial Chorten nearby, where Buddhists circle clockwise while reciting prayers and whirling prayer wheels. The there is the Tiger’s Nest (Taktsang), which is a beautiful monastery located in the cliff-side of the upper Paro valley, in Bhutan. Punakha Dzong, Zuri Dzong Hike, Gangtey Valley and Bumthang Valley are some other breathtaking destinations in Bhutan. 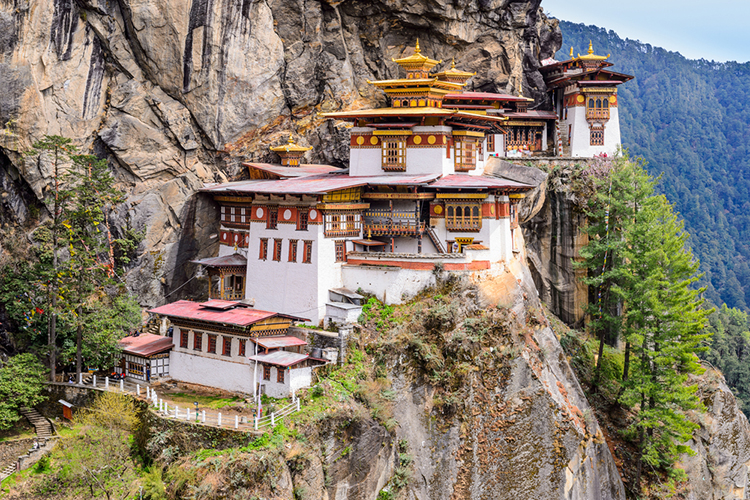 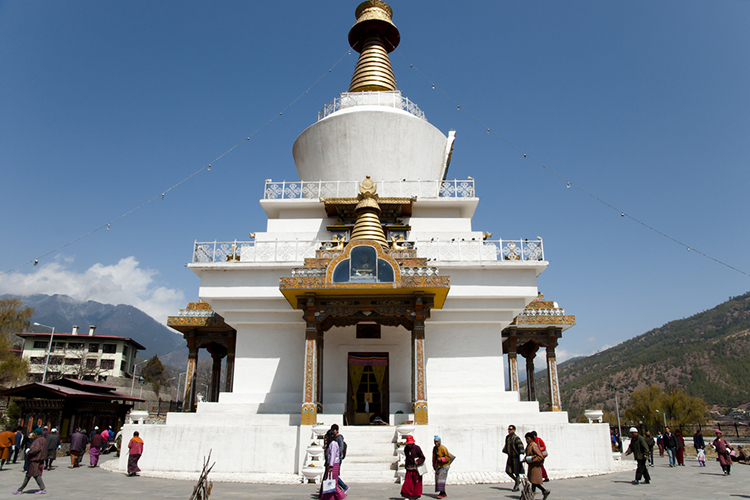 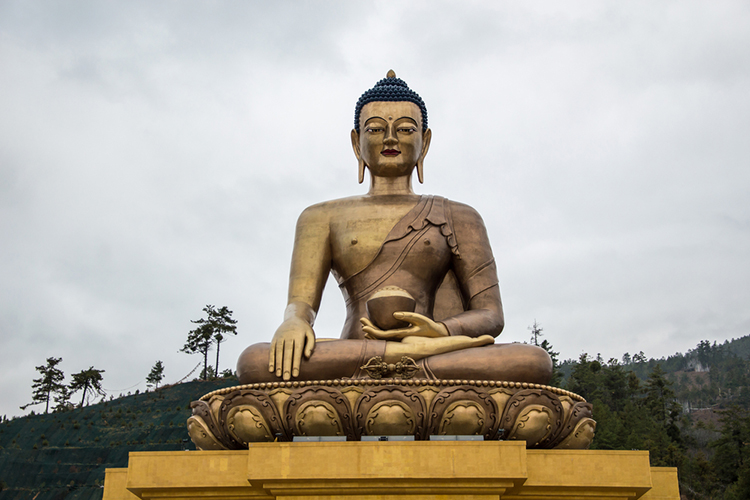 Cuisine: Ema datshi, the national dish of Bhutanese is a very spicy dish made with cheese and chilies and take great pride in it and you must try it too. The people also take great pride in asserting that Bhutan is the first country in the world to have banned the sale of tobacco under its Tobacco Act of 2010, hence you can ensure clean and fresh air.

Culture and society: Bhutanese tradition is deeply steeped in its Buddhist heritage, be it the dress (The national dress for Bhutanese men, Kho and for women Kira), the language (Bhutanese or Dzongkha), the cultural activities (including masked dances, dance dramas accompanied by traditional music at festivals) or its national sport archery, which you may have a feel of when you visit Bhutan. Also, you may get to see a convention in Bhutanese families where inheritance is generally passed through the females rather than the males i.e. the daughters inherit their parents’ house and the man is expected to make his own way in the world and is asked to move to his wife’s home. Another distinct feature includes polygamy. Though rare, it is accepted in order to keep property in a contained family unit rather than dispersing it.

Feeling royal: Bhutan made the transition from absolute monarchy to constitutional monarchy and held its first general election in 2008. The current king is Jigme Khesar Namgyel Wangchuck who wed Jetsun Pema on 13 October 2011. And it may come to you as a surprise that spotting/meeting the King of Bhutan is not as difficult as you may think. 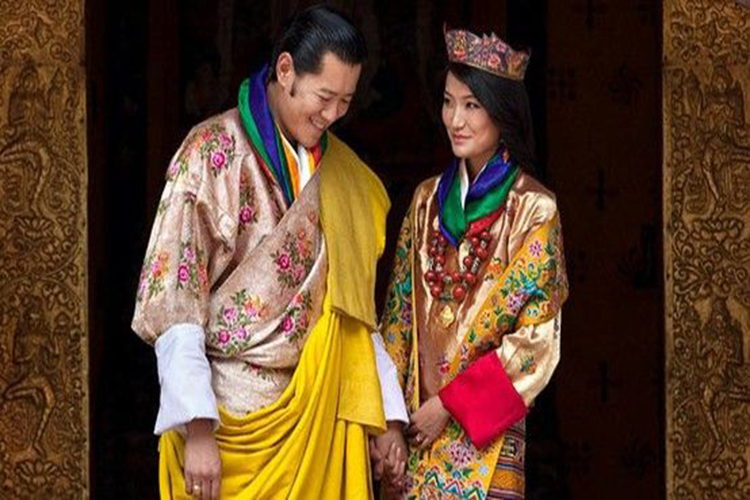 Transport: Paro Airport is the only international airport in Bhutan. And though Bhutan did not have any railways earlier, it has entered into an agreement with India to link southern Bhutan to India’s vast network. Coming to the connectivity through road, the Lateral Road acts as Bhutan’s primary east–west corridor, connecting Phuentsholing in the southwest to Trashigang in the east and also conncets the capital Thimphu to other major population centres such as Paro and Punakha. 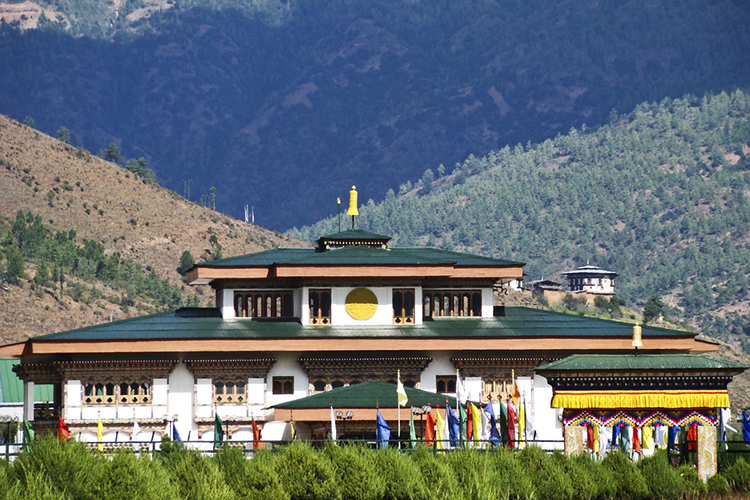 Economy: Bhutan’s currency is the ‘ngultrum’. Its value is fixed to the Indian rupee, which is also accepted as legal tender in the country. Though Bhutan’s economy is one of the smallest economies of the world, it has grown rapidly in recent years. Agriculture used to be more instrumental in managing the economy earlier than now Bhutan established itself as the first country in the world, with 100 percent organic farming, which is creditable.

Souvenirs: Hand-woven textiles, Yatras or Yethras (colorful strips of wool cloth, dyed with natural colors, which are used to create blankets, jackets, bags and carpets, specially those produced in Jakar, Bumthang), Buddhist paintings (usually made ​​of cloth), stamps (as Bhutan is said to be the “philatelist paradise”) with detailed images, bright and lively colors and with a high numismatic value, Dzi stones, brass statues of various Buddhas, saints, Vajra bells, Dorje bells used for religious rituals, cymbals, Bhutanese violins, Tibetan trumpets and prayer wheels (which are a popular choice amongst the tourists) are the various souvenirs that you may pick up from the markets of Bhutan.