Lyonchoen said that with the launch of the service delivery mobile apps, people can conveniently avail the services as and when they like through the mobile apps. “People don’t have to visit offices and meet with the officials personally to avail their required services.”

Lyonchoen said that the launch of the apps is an opportunity for public servants to provide timely services to the citizens.

“The apps will greatly benefit the public.”

Including the 15 mobile service delivery apps, currently there are 96 e-services under the G2C office.

G2C office head, Sonam P Thaye said that technology has become a part of our daily lives and changed the way we work, play and socialise, she said.

She added that the emergence of the Internet and mobile technologies calls for fundamental re-thinking and transformation in the way the services are delivered. 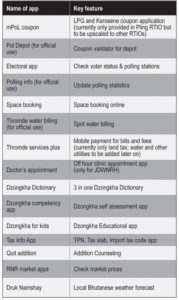 “We need to ride this wave of digital revolution and meet the growing expectations of an educated and technologically savvy citizens,” she said. “The launch of the apps is therefore a modest attempt of the G2C office in this direction.”

The G2C office under the Office of the Prime Minister, first attempted developing public service delivery mobile apps in May 2015 with the conduct of the first mobile apps development contest in the country.

Three mobile apps, Road Safety, Dial for Blood and M-Power Youth, which were developed during the contest were subsequently handed over to the agencies.

The office also carried out a public service delivery survey in eight dzongkhags to identify citizen centric services that can be moved onto mobile platforms in the same year. “Together with consultative process with the agencies, the current 15 mobile apps were identified for development,” Sonam P Thaye said.

The identification of the services was done objectively to ensure maximum utility and impact, with particular focus on reaching to the unreached sections of the citizenry.

The development of the m-services began in early 2016.

An official with the G2C office said that the development of the m-services is one of the major milestones for the public service delivery initiative.

“The main objective is to narrow the existing gap in provision of services and empowering citizens to engage productively in the public arena,” the official said. “Each service is uniquely designed to capture the intended target within the general objective of maximising the benefits of technology-driven initiatives.”

Sonam P Thaye pointed out that limited experience in the area was the major challenge as the development being the pioneer venture in terms of G2C m-services.

“The overall scope and multidisciplinary content, and the huge number of stakeholders were at times very challenging,” she said. “The development is perhaps the easy part, sustaining the operations of the apps will be crucial.”

DDC’s ICT officer, Tenzin Namgyel said that of its three apps, the Dzongkha for kids app contains audio, games and quizzes for children to learn Dzongkha alphabets, numbers and some basic Dzongkha words with correct spelling and pronunciation.

“As most of the children are fond of smartphones and learn from it, the app was developed so that Bhutanese kids can learn Dzongkha while they play with smartphones.”

The official said that while the services are ready for immediate download and public use, the agencies and G2C office would be making continuous improvements and fix any bugs that emerge in the coming months.

The mobile apps were developed with support from the Swiss Agency for Development and Cooperation (SDC).

The Office of the Prime Minister and Cabinet also formally handed over the apps to the relevant agencies, yesterday.