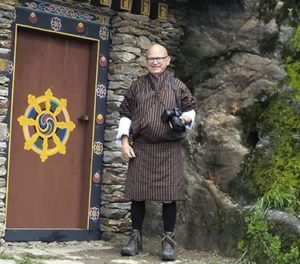 Chuck Reed arrived in Bhutan in May to better understand the country and Buddhism.

Five years ago, the 66-year-old American from West Virginia stumbled on a Netflix movie about Bhutan. It was the name Bhutan that had him watch the movie. And he figured where his next destination would be.

Reed stayed in the country for 43 days, perhaps the longest visit by a tourist.

“I heard that Bhutan was a very expensive place to visit. I saved for a couple of years to be able to afford the visit,” said Reed who thinks Bhutan is the only country with purest Buddhist culture in the world.

A few years ago, Reed started writing poetry about creation, reality and consciousness. But he did not think it would be complete without a deeper understanding and appreciation of Buddhism.

Reed had been working at West Virginia State University for the last sixteen years. “I work in a federally-funded programme that helps poor students who are the firsts in their families to go to universities.”  His passion, he said, was to make sure these students got worthwhile education that would prepare them to start a good career.

In a span of six weeks, Reed visited 10 dzongkhags starting from Haa to Trashigang.

Choetens are his favourite in Bhutan. “They are the physical manifestation of the Buddha in a landscape, which is everything and everywhere. I’ve taken more photos of it than any other thing.”

Here in Bhutan, he said that when people pray they are intended for all sentient beings. “This is different from all other cultures and absolutely beautiful.”

In Haa, he identified a flower that was also found in his native home. “My guide searched it on her smartphone, and then we found that it cures affliction by evil spirits. But if this happened in America, I would have never read about it.”

Reed loved homestays in Bhutan where he got to eat berries and ferns. “It’s because you are eating with your family in a circle, with everyone else.”

He visited monasteries, trekked through mountains and met with lamas. While on a trek to Jomolhari the mountain had been shrouded in clouds for the whole month. “When I got there, all the clouds lifted and Jomolhari showed herself in full glory. It was incredible.”

On his journey to the eastern part of the country, Reed stopped to visit a small community school. “Everything there was meant to encourage learning. It was beautiful, just like a park. I wish my students had a school like that to go to.”

Interacting with the Bhutanese, Reed said he notice that the Bhutanese, particularly young, wanted to leave Bhutan for better opportunities abroad. He did not understand why anyone would want to leave such a good place and culture.

“If I ever get an opportunity to return to this beautiful country, I would like to go to Gasa and Laya,” Reed said. “As reality, creation, consciousness are subjects that are at the heart of Buddhism, I wanted to come here to make sure that I got that part right.”

“I may have seen things that may have been black and white. After visiting Bhutan, they are now all radiant and colourful.”