A friendship beyond protocol

You are here: Home » Blog » News » A friendship beyond protocol 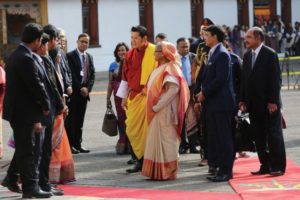 As the Prime Minister of Bangladesh, Sheikh Hasina, concluded the second of her three-day bilateral visit to the Kingdom, delegates and observers coined a new term to describe a state visit by a head of government: “an atmosphere beyond protocol”. There were good reasons for this.

His Majesty The King and Her Majesty The Gyaltsuen granted an audience to the Prime Minister, family members, and senior leaders of the delegation and introduced His Royal Highness The Gyalsey to the visitors. Informality as a gesture was unprecedented when Her Majesty arrived early to welcome Prime Minister Sheikh Hasina for the joint inauguration of the International Conference on Autism and Neuro Development Disorders (ANDD) on the morning of April 19.

International visitors to Bhutan tend to relax as soon as they land in Paro. The 70-member Bangladeshi delegation, which included Sheikh Hasina’s family members, politicians and bureaucrats, advisors and PMO staff, diplomats, security and media, all said that they had not received such a warm and informal, yet meaningful welcome anywhere at such a level.

His Majesty The King graced the historic unveiling by Prime Minister Sheikh Hasina of a site for the construction of the Bangladesh Embassy at Hejo, a Thimphu suburb planned as a future diplomatic enclave. Officials of the two countries applauded the occasion which is seen as a significant stride since the first ambassador of Bangladesh presented his credentials in 1979 and an entire diplomatic corps arrived in Thimphu by bus from Dhaka. Bangladesh, both officialdom and the people, has been consistent in appreciating Bhutan as the first country to recognise Bangladesh as an independent sovereign nation in 1971.

The exchanges between Bhutan and Bangladesh is currently characterised by trade, education, health, tourism, agriculture, and communications. Three agreements signed during this visit expands the relationship to cooperation in cultural activities, including the arts, and streamlines the taxation system on cross border commercial activities.

Four Memoranda of Understanding were also signed to facilitate water routes in the two countries for transport, collaboration between academic institutions, develop and certify standards on products, and ensure that the trade of food and agricultural products between the two countries are safe and meet the requirements of the importing country.

Compassion assumed a strong tone during the visit with the ANDD conference where autism, a disability which is little known in Bhutan, and neuro developmental disorders received close attention. It was inspiring to look beyond the normal stigma and fear connected with the disability, and at some inspiring examples of autistic people who reach out for recognition “for quality and not charity”.

Prime Minister Sheikh Hasina has been advancing the agenda of autism and other disorders in the region and globally, and her daughter, Saima Wazed Hossain, is WHO’s regional champion for autism in South Asia.

In Bhutan, autism and other special needs in the country, are gaining attention because of the patronage of Her Majesty The Gyaltsuen who is also the Royal Patron of Ability Bhutan Society inspired by the vision of His Majesty The King who advocates a compassionate and just society, an underlying goal of Gross National Happiness.

It was the spirit of peace that the members of the delegation described in several ways. A group of journalists said that they wished the visit was longer. A delegate who has accompanied the Prime Minister Sheikh Hasina for several state visits, said that he had never seen her so relaxed. At an informal dinner last night, a senior member of the Bangladesh delegation said that the visit was exceptional but that was only to be expected in Bhutan.