You are here: Home » Blog » News » Aaron Bayard wins Tour of the Dragon 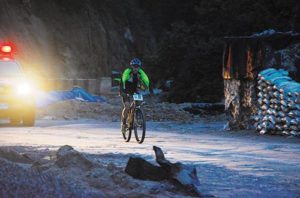 At the ninth edition of Tour of the Dragon, an annual one-day mountain biking race in the country, Aaron Bayard from America recorded the best time at 11 hours and 11 minutes since 2015 on Sunday in Thimphu.

It took more than 50 minutes after Aaron Bayard for Norbu, a local biker, to reach the finish point. Norbu completed the race at 12 hours and 3 minutes to win the runner-up position.

Following Norbu was Tashi Namgyal who reached finish point after 12 minutes to win the third position.

A total of 48 bikers, seven from America, six from India and four from the United Kingdom took part in the ultra marathon mountain biking race organised by Bhutan Olympic Committee.

Rinchen Dema, 23, is the only Bhutanese women to compete in the race to date. She took part in the race last year.

A total of 68 bikers took part in Dragon’s Fury – 35 in senior men category, 26 in junior boys, six in senior women, and a lone participant in the junior girls’ category.

Tenzin Wangmo, the lone participant in the junior girls’ category, finished at 5 hours 26 minutes, which was 28 minutes earlier than last year’s record.

The 60km race flagged off from Punakha at 10 am on Sunday.

More than 100 local and international bikers were involved in two separate events of Tour of the Dragon and Dragon’s Fury on the same day.