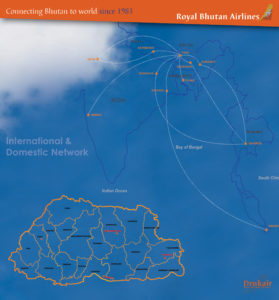 Aviation: Bhutanese airlines can now fly to the UAE following the signing of an Air Services Agreement (ASA) between Bhutan and UAE on February 13.

Dasho Karma Wangchuk Penjor said that the agreement establishes a legal framework for the two Bhutanese airlines to operate to the UAE. He said that the new air route is expected to cater to flight demand of the passengers travelling from Europe to Bhutan and also for Bhutanese working in the Gulf region.

There more than 1,200 Bhutanese currently working in the region and the number is expected to grow with the labour ministry’s over seas employment scheme.

“It opens up opportunities for both the flight operators and also, if they choose to fly to the UAE, they can make the optimum utilisation of their aircrafts,” said Dasho Karma Wangchuk Penjor.

However, the decision to operate on the new route will depend on the two airlines based on their feasibility studies and commercial viability.

Drukair CEO Tandi Wangchuk said that since the airline learned about the agreement just a week ago, it would take some time before the new route could be operational for the national airline.

“In the airline business, any additional route takes time because a route feasibility study has to be completed which involves market analysis, competition analysis, cost analysis, tariff analysis and fleet/crew availability, among others,” said Tandi Wangchuk. “Normally these processes are planned a year in advance. Therefore we will not have immediate operations but will start the process as soon as possible.” 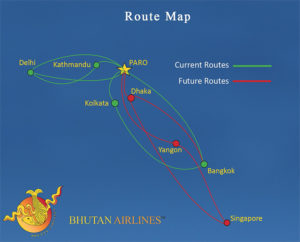 He said that in terms of geography, UAE is ideally located to be a hub for collating traffic from Europe, Africa and the Middle East to Bhutan. Tandi Wangchuk said that Dubai has an excellent connectivity internationally. “Further the number of Bhutanese working in the Middle East is rising each year. If a flight is available, people from the Middle East may want to use Bhutan as a destination to escape during the hot summer months. There is a possibility but a serious study and analysis needs to be done.”

He added that the other possibility is through the intermediate stations in Nepal or India, which provides opportunity to pick up fifth freedom traffic. “But the Dubai sector is highly protected by the countries for their own airlines.”

Meanwhile, the national airline will conduct a feasibility study this year to some airports in Japan to be its eastern most hub in east.