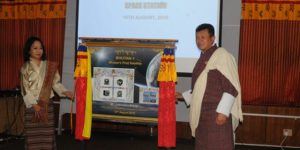 This comes after the release of Bhutan-1 along with CubeSats of the Philippines and Malaysia into ISS on June 29.

Officials of the information and communications ministry gathered once again at the ministry’s conference hall yesterday.

Live-streamed on YouTube, representatives from various countries and institutes gathered at the Japan Aerospace Exploration Agency (JAXA) in Tokyo, Japan.

Following the ‘go’ approval from the representatives of Bhutan, Malaysia, and the Philippines, ISS released the satellites at 3:45pm yesterday.

This means that Bhutan-1 would be now operational and can be tracked from the ground station at the information and communications ministry.

Marking the historic event, jointly produced by MoIC and Bhutan Postal Corporation Limited, a new 3D lenticulaire stamp was also launched. The stamp has four apartments with the pictures of Bhutan-1 satellite, which when viewed from a slightly different angle can see pictures of four dzongs of Bhutan.

Sold at Nu 1,000 a piece, Bhutan Postal Corporation Limited has limited 4,500 copies of the stamps.

CubeSat Bhutan-1 was developed by Bhutanese engineers at the Kyushu Institute of Technology, Japan as part of their Master’s Degree under the BIRDS-2 Project.

The BIRDS project is a cross-border interdisciplinary satellite project for non-space faring countries supported by Japan.

MoIC’s officiating secretary, Karma Wangchuk, said that through His Majesty The King’s vision to raise awareness and interest in space science and technology, Bhutan in 2016 sent engineers to the Kyushu Institute of Technology in Japan to study space engineering and to participate in the BIRDS-2 Project.

The satellite will pass over Bhutan five to six times a day for about three to four minutes.

Bhutan-1 satellite was sent with five major experimental missions. The satellite that has two cameras attached to it will take pictures and video of the country.

Chief of Telecom and Space Division, Sonam Phuntsho, said that the satellite would relay data of the glaciers and lakes or water level through sensors to the ground station.

The satellites will also measure the radiation in the space.

As the satellite used consumer GPS product in the three CubeSats, Sonam Phuntsho, said that researchers could also study and check how it functions.

“Satellite specialised GPS chips are expensive. The consumer GPS product is much cheaper. So, they can study the type of changes that needs to be made in future.”

He added that the development of the satellite also helped build the capacity of the Bhutanese engineers.

The data collected with the satellite will be shared with various institutions and colleges for research purposes in the country.

At JAXA, Japan, ambassador of Bhutan to Thailand, Tshewang C Dorji, thanked the engineers who developed the satellite, Kyushu Institute of Technology, and JAXA for their efforts in developing the country’s first satellite.