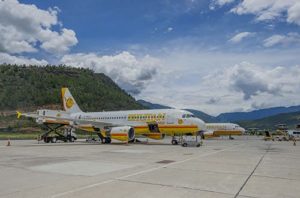 With the arrival of the second Airbus 319 on August 4 in Paro, the Bhutan Airlines now has a fleet of two aircraft.

Two Airbus 319 are on lease for four years.

Bhutan Airlines signed the lease agreement for two airbuses with AerCap, a global leader in aircraft leasing and aviation finance on September 28 in Thimphu last year.

Chief executive officer of the Bhutan Airlines, Phala Dorji, said that both the airplanes have 126 seats each. “Older ones were replaced to give confidence and provide passengers with a safe and comfortable experience of the flight.”

He said that seat numbers have increased and that both airplanes are about seven years old, which in the aviation world is as good as new.

Phala Dorji said that the older airplanes were about 15 years old.

Currently, Bhutan Airlines operate flights to Bangkok in Thailand, Delhi and Calcutta in India, and Kathmandu in Nepal.