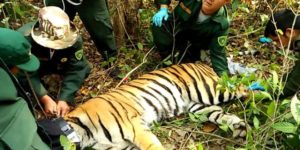 A team of foresters and Bhutanese biologists radio-collared a tiger for the first time, a major milestone in the history of tiger conservation.

The three-year-old female tiger weighing 110kgs was caught and collared on February 9 at the Royal Manas National Park (RMNP).

National Tiger Centre’s (NTC) programme director, Tempa Tshering (PhD), said, “We were so overwhelmed that we even forgot to take pictures of the tiger. To mark this auspicious milestone in tiger conversation in the country, she was named Tendrel Zangmo.”

The tiger collaring team has been in the park’s forests looking for tiger signs and monitoring their movements for almost a month.

“We imported trapping kits from the US and used humane ways of snaring the tiger,” said Tshering Tempa. “We tested them to confirm that the traps would not injure the cat. We had conducted several drills to prepare ourselves.”

The whole collaring process lasted about 45 minutes and she was released without any injuries.

“We were a little nervous, but we are happy that everything went according to our plan,” Tshering Tempa said.

The information she provides would be crucial to understanding tiger movement pattern, identifying key corridors, and mitigating human-tiger conflicts.

Tshering Tempa said that Bhutan is unique in that its tiger habitat is contiguous across the whole country and extends from lowland subtropical jungles all the way to subalpine forests.

The highest altitude for tiger in the world was recorded in Wangchuck Centennial National Park at 4,400 metres above sea level.

Tshering Tempa said that not much is known about the tigers in mountains.

“With this exercise, we will be pioneers in filling this critical information gap in tiger science,” he said. “What is more satisfying is that it is a Bhutanese team that carried out the whole operation.”

Foresters call it a beginning of a new era of tiger conservation and monitoring in Bhutan.

The tiger is an apex predator and an umbrella species, which means ensuring their survival allows many species to live and flourish in its large shared habitat. However, threats to these cats still exist in the form of killing for profit or in retaliation, destruction of habitat for industries or subsistence.

Tshering Tempa said a thriving illicit global trade has drastically reduced tiger populations across its range. Today, fewer than 3,800 tigers exist in the wild, spread across 13 countries in Asia and the Russian Far East.