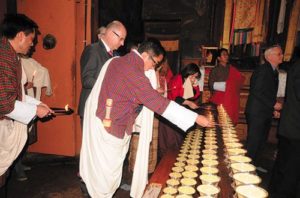 Bhutan observed the International Day of Happiness yesterday with the lighting of a thousand butter lamps at the Simtokha Dzong, according to a press release from the foreign affairs ministry.

Foreign minister Damcho Dorji led the commemoration this year, where the theme is Share Happiness – focusing on the importance of relationships, kindness and helping each other.

The day was first observed in 2013 after the United Nations General Assembly on June 28 in 2012 declared March 20 as the International Day of Happiness.

The UN World Happiness Report 2018 has ranked Bhutan as the 97th happiest country in the world out of 156 countries.