You are here: Home » Blog » News » Bhutan once again makes its entry on list of 100 Sustainable Destinations 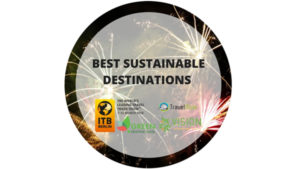 The award function will be held in Berlin, Germany on Wednesday (March 7). Officials from the Tourism Council of Bhutan (TCB) said, there will be audience prize in addition to the jury awards, where the audiences of the event will be asked to vote for the top hundred audience prize.

The finalists were categorised in five categories: Best of Cities, Communities and Culture, Best of Nature, Best of Seaside, Earth Award and Best of the Planet.

“We are really looking at organised way for trekking, respecting animal movements, and protecting biological corridors. We have designated camp sides and environmental respects and recognition that we really commit to,” stated Damcho Rinzin, the Media Spokesperson of TCB, adding that due to all these justifications, they felt Bhutan should be on the list of 100 sustainable destinations across the globe.

The 12 jury members from 12 different international agencies selected the countries that will qualify to be on the list of final sustainable destinations. The selected places were those fulfilling the hundred criteria and six different themes ranging from the management of the environment to respecting of the nature.

“The jury which represents from top twelve agencies are the champions of sustainability, so they will look into all these criteria and try to understand what Bhutan has done to be the champion,” shared Damcho Rinzin to BBS News.

He also said such awards are important for the country as foreigners will come to know about its commitments to conservation of nature. Bhutan has made to top hundred lists in the past as well.

The World’s Best Sustainable Destinations Award is an annual event and it is one of the prestigious opportunities to showcase green destinations to the world, focusing mainly on tourism.

The Green Destinations- an agency that recognises destinations around the world for championing sustainability in terms of nature and culture among others is the organiser of the award ceremony.