Bhutan the Conservation Jewel of the Himalayas

You are here: Home » Blog » News » Bhutan the Conservation Jewel of the Himalayas 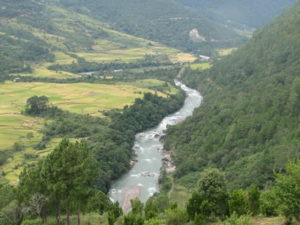 The early 20th century saw tremendous growth in the global demand for pulp and timber. In the absence of conservation policies and environmental lobbies many countries around the world engaged in rampant deforestation to profit from the booming trade.

Overnight, Boreal Forests from Russia to Canada that took over a century to mature were levelled for pulp and timber. Situated in the Indo-Malayan and the Palaearctic biogeographic realms, trees in Bhutan grow much faster.  Bhutan resisted this temptation and mindfully chose not to cut down the trees. Instead she made efforts to conserve them.

In 1907, Bhutan was unified under His Majesty the Druk Gyalpo Ugyen Wangchuck. As the steward of the newly instituted hereditary monarchy, he wanted to modernise the country, but was in no hurry to do so. He could have easily cut down the trees and used the funds for development purposes. Instead, he chose to conserve the forests and bring about changes cautiously and gradually.

Four years after Gongsar Ugyen Wangchuck ascended the throne, he began to bring into action his plans for conserving the natural environment. This was long before environmentalism came into vogue.

In 1911, the Druk Gyalpo sought assistance from British India to protect the forests in southern Bhutan from illegal logging. The Government of India dispatched the Deputy Conservator of Forests from Jalapaiguri to assist. In his report Mr Jacob recommended that a system of conservation of the forests in Bhutan would be beneficial for the country’s “vast forests,” but noted that Bhutan lacked “the money to inaugurate such a system.”

However, this did not dampen His Majesty’s growing interest in the forests and his determination to conserve them. His will was noted by the British Political Officer B.J. Gould, who wrote to his superiors in 1914 that states:

“The Maharaja [His Majesty] has informed me orally that he is anxious to take suitable measures for the conservation of his forests, but that it is difficult for him to take the necessary steps owing to lack of funds.”

In September 1921, his vision for change was revealed in a 20-point letter to the British government. His vision ranged from agricultural development to improvements in health and education and preservation of the forests. Historical records show that the Druk Gyalpo was in no haste to generate revenues from the forests. In fact he was clear that income should be generated sustainably and without compromising the health of the environment.

Point nine of the letter laid the foundation for Bhutan’s conservation policy. In his letter of September 5, 1921 to the Viceroy of India, the First Druk Gyalpo writes as follows:

“Bhutan has great forests which, if worked on good lines, should in time produce considerable revenue to the country and be a benefit to India. At present they produce hardly any revenue and those adjoining the plains of India have been largely destroyed through the absence of supervision and ignorance of the proper methods of conservation.  I should like to have four of the lads trained at a School of Forestry.”

Bhutan, being a landlocked country with barter economy, did not have the resources to fund the implementation of the King’s plans. So the only source of income was the dense forest and with the fast growth rates of trees and with huge global demand for timber, some British saw this as an opportunity. But our King was wise and chose not to lift the axe and in fact refused outside proposals to cut down our trees. The following British government report makes this clear.

The 1924-25 Annual Report on the Relations between the British Government and Bhutan states, “In 1923, a request to work the Bhutan forests overlooking the Duars was received from one Mr. Chas E. Simmondes of England.  The application was supported by Brigadier General the Hon’ble C.G.Bruce and others, but His Highness the Maharaja of Bhutan, after consideration, declined to accept the proposal.”

Dr. Graham, founder of the Dr. Graham School in Kalimpong, India, and a close friend of our King, supported his plan to educate the foresters but also tried to encourage commercial logging. In 1925 the founder of the school in his letter to our king made the following suggestions:

On 22 June 1925, Dr. Graham writes as follows to His Majesty.  “If you had the conditions so drawn up as to avoid interference with any of your old laws and customs, I think that this proposal is one of the very best for developing your country … Any arrangement with the company would naturally be on the understanding that they replanted every area which they felled. I do hope that you get an arrangement satisfactory to Bhutan and likely to produce a large income which will last. Hitherto, the forests have been only cut down and no proper steps have been taken for their being replanted.”

Dr. Graham’s suggestion to generate large income from the forest was not new. On 21 July 1904, Sir Charles Bell in his letter to the Chief Secretary to the Government of Bengal suggests forest as a source of revenue. In the report, Sir Charles Bell writes that Bhutan’s “dense forest” contained trees “suitable for timber, fuel, mat-making and other purposes.”

Far from being tempted with this wealth, His Majesty continued to take complete responsibility for and great interest in the conservation of our environment.  He did not allow his vision and his interest in developing the nation interfere in conserving the environment. He did not hasten the kingdom’s developmental plans as this would have been at unbearable cost to the environment. 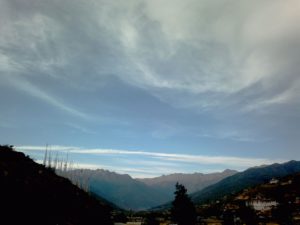 In 1927, three Bhutanese rangers completed their course from Dehra Dun Forestry School in India. Subsequently, they worked with Darjeeling State Forests for few months to gain experience before returning home to assume independent charges of responsibility. Upon their return, the king’s wish of conserving the forest sustainably and scientifically was not only achieved but the foundations were also laid for the policy of conserving the environment.

As a result of His Majesty the Druk Gyalpo Ugyen Wangchuck’s vision, today Bhutan is a biodiversity hot spot with many hidden treasures and is the Conservation Jewel of the Himalayas. While the Constitution mandates 60 percent of forest cover at all times, at present we have 70 percent of the land under natural and pristine forest cover. While scientists worldwide observe with regret the extinction of species of both flora and fauna, Bhutan is continuously discovering new species of both flora and fauna. We have 5,600 vascular plants, 200 mammals and the avian biodiversity count has reached 723. Today our natural environment is our greatest heritage.