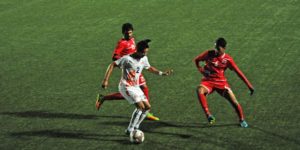 Bhutan marked an impressive start at the Under-18 SAFF championship at home humbling the Maldives, ranked 20 places above it, to a 1:0 defeat at the Changlimithang stadium on September 18.

This is the first international game for the team.

The national coach Song Jung Lee said that the home crowd support was amazing and played a vital role in the victory.

“We won the match because of the support from the home crowd,” he said.

The youth academy coach, Song Jung Lee is also known for the first international triumph for the under-16 national team.

The U-18 team win comes on the back of the U-16 national team’s win over Sri Lanka in Nepal a month ago.

Bhutan built a stronghold in the midfield from the start using the whole width of the pitch. Both sides played a slow game trying to build up set pieces.

The first chance for Bhutan knocked in the 25th when skipper Chimi Tshewang’s attempt from the center circle hit the crossbar.

Despite their height advantage, the Maldives could not capitalise their chances from the crosses. The two settled for a goalless draw at the end of the first half.

Unlike the first half, the Bhutanese team played more accurate passes in the second half. Six minutes into the second half, midfield Kelden Lhotshel Dorji set up scoring chances. He assisted Orgyen Wangchuk Tshering with a through ball that finished behind the net after the Maldivian defenders failed to clear the cross in the penalty box in the 51st minute.

The Man of the Match, Orgyen Wangchuk Tshering, said that the team’s performance was good.

“We’re a better team than this. We could perform better. It’s a proud moment for me as I could score the first international goal today,” he said.

The loss gave the Maldives a tough start in the championship as they will face Bangladesh, who came back from 0:3 to beat India 4:3 in the first game on September 18, today.

Coach of the Maldives, Ihusan Abdul Ghani said that the game was difficult as they faced the home side for the first time.

“Players couldn’t deliver as the temperature was cold. We could not convert the chances in the first half. Bhutan came well organised after the first half.  In trying to stop the pressure we committed many fouls.”

“Next match against Bangladesh will be a tough game but we’ll try hard. I hope the players learn from the mistakes and play better in the next game. Anything is possible and we’ll come back stronger,” said the coach.

Today, Bhutan will face the defending champions, Nepal at 4PM while the Maldives play Bangladesh at 7PM.