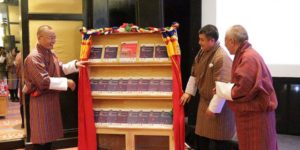 Bhutan’s population on an average increased by 8,380 people a year in the last 12 years.

According to the reports of Population and Housing Census of Bhutan (PHCB) 2017, which Prime Minister Tshering Tobgay released yesterday, Bhutan’s total population was 735,553 persons where 681,720 persons were Bhutanese.

Drop in birth rate and fertility were some reasons according to the statistics from the report. The Crude Birth Rate (CBR) is 15.5 per 1,000 population, which is a decrease from 19.7 in 2005. The total fertility rate (TFR) is 1.7

, which implies that a woman on an average bears 1.7 children during her reproductive life, down from 2.5 in 2005.

Prime Minister Tshering Tobgay said this is worrying as the population replacement rate for the country is 2.1

The sex ratio of the population is 110, which means that there are 110 males for every 100 females. The median age is 26.9 years, indicating that half of Bhutan’s population is younger than 26.9 years.

Lyonchhen Tshering Tobgay said that at this rate, Bhutanese population growth could go negative in the next seven y

ears. “This is unacceptable and a cause for concern because we have such a small population,” he said.

official from National Statistical Bureau (NSB) Tashi Dorji, presenting on the findings said that the decline in birth rate is also an indication that the society is ageing.

Lyonchhen Tshering Tobgay said that Bhutanese population is ageing not just among the elderly but throughout.

Out of the total population, 62.2 percent lived in rural areas and compared to 2005, the population density increased from 17 to 19 persons /kmsq.

Among dzongkhags, Thimphu has the largest population with 138,736 people constituting 19.1 percent of the total population, while the least populated is Gasa dzongkhag with 3,952 persons or less than one percent.

“What is driving this, in part is because our elderly people are living longer and infant and child, under five mortality rates have come tumbling,” he said.

migrated from rural to urban areas.

holds have reported that the source of drinking water is not reliable. The proportion of households with improved sanitation is 74.8 percent in 2017.

The network of roads have expanded and about 92 percent of the households in the country are within 30 minutes of walking distance from the nearest motor road, which is an increase from 63 percent in 2005.

ufficiency or not enough food to feed all household members,” one of the presenters from NSB, Pema Namgay said.

Among the regular Bhutanese households (158,513), 60.4 percent reported that they own land. About 73 percent of households in rural areas own land compared to urban areas (38.7 percent).

“The reports give us an chance to understand the opportunities and risks and where we need to work,” Lyonchhen said. He also applauded the NSB and stakeholders for the first international standard census conducted by locals.

Lyonchhen attributed the successes to Their Majesties the Kings for achieving development that has propelled Bhutan out of the least developed countries.

“From here where we go is in our hands and experts have much to do to determine where we need to go,” he said.

Education secretary Karma Yeshey, an organising committee member, said that the objective of the 2017 PHCB is to provide data for the purposes of policy formulation, socio-economic planning, service delivery, and indicators for m

easuring progress towards the achievement of key national targets.

The 2017 PHCB, which is the second in series, conducted on May 30 and June 1 last year used the de-facto method of enumeration and people were counted where they were found on the census reference date regardless of their nationality or usual place of residence.

The 2017 PHCB national report and the reports for the 20 dzongkhag can be accessed from www.nsb.gov.bt.