Bikers from home bag Tour of the Dragon titles

You are here: Home » Blog » News » Bikers from home bag Tour of the Dragon titles 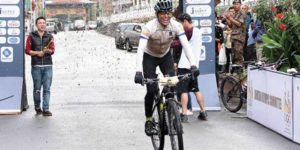 Despite losing time in replacing his flat tyre in Trongsa, Sonam still finished first completing the 268km-race in 12hrs and 37mins on September 2.

The three-time champion, popularly known as the “Son of Dragon” bagged  yet again the title of one of the world’s toughest biking races, “Tour of the Dragon”.

Since winning the title in 2012, he was the fastest rider in 2013, and 2015. He had to settle for the third position in 2014 because of a crash. Sonam withdrew from the competition because of his shoulder injury last year.

Sonam rode to victory on Saturday to a loud cheer from hundreds in the crowd, who waited eagerly for hours, at the Clock Tower Square for the riders.

Sonam was followed by the three-time runners-up, Rajkumar Shrestha, a 28-year old biker from Nepal. He completed the race in 13hrs,11minutes.The race started from Chamkhar town, Bumthang at 2AM. Sonam completed the day-long journey of daily commuters who travel by buses in 12hrs and 37minutes. He reached the finish line, the clock tower at 2:37PM.

In the third position came Norbu completing the race within 14hrs and 20 minutes. He came fourth in his debut last year.

A total of 20 local and 15 foreign cyclists participated in the recent mountain race. The race was dominated by the foreign bikers in the previous edition as none of the local bikers could win the top spots in the 7th edition of the event.

The title winner, Sonam said that he trained hard for the event.

The bikers climbed upto 11,500ft height across four mountains, descended to 3,937ft and biking on 268km along muddy and freshly-cut road in harsh conditions makes the tour the most challenging and toughest race in the world, according to bikers. 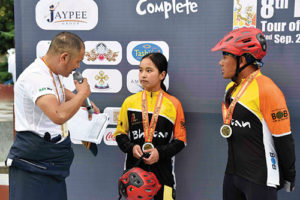 A 23-year old Rinchen Dema became the first Bhutanese women to compete in the race.

However, her dream of finishing the race ahead of a lone competitor from the US came to an end as the climb upto the Dochula Pass drained her. She withdrew mid way.

The other race, the Dragon’s Fury flagged off at 10PM from Lobesa.