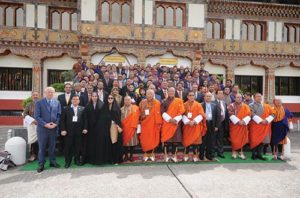 It is only apt that the Asian Parliamentary Assembly (APA) Standing Committee on Social and Cultural Affairs meet in Bhutan to discuss culture preservation, National Assembly Speaker Jigme Zangpo said.

The Speaker who is also the Vice President of the Standing Committee said that Bhutan’s concept of culture, as underlined by Gross National Happiness, is neither monolithic nor singular. “So, it was fitting that Bhutan hosted this parliamentary discourse,” he said.

He said that the most crucial factor contributing to the development of a rich culture in the small country has been the leadership of the Kings.

“As a small land-locked nation surrounded by two of the largest and most populous countries in the world, our Kings saw in our culture the key to our survival as a nation and our well-being,” he said.

Unlike in the developed world, the narrative of Bhutan’s socio-economic modernisation is not one of industrialisation but of investments in agriculture, culture and public goods like roads, schools, and hospitals.

“The intellectual font of the policy commitment to preserve and promote our culture finds expressions in the concept of Gross National Happiness, advocated by our Fourth King and now championed by His Majesty The King,” the Speaker said.

He said that the Kings remain the inspiration for people from all walks of life to pursue a culturally rich lifestyle and nourish deep sense of pride as Bhutanese.

“The government and parliament work to put in place policies and legislations that capture the long-term vision of our King, of which culture occupies an important place.”

Speaker Jigme Zangpo said that more than ever, the region needs to build institutions, create legal instruments and ensure intellectual as well as resource support to not only preserve and promote cultural heritages but also to ensure that dynamism is inbuilt in cultural norms, practices and value system so that the people are well-equipped to manage and control changes that affect their daily lives.

In the first APA meeting hosted in the country, more than 100 parliamentarians from 20 Asian countries will discuss measures on protecting cultural diversity and cultural heritage in Asia.

During the two-day meeting, that ends today, the APA sub-committee will deliberate on the nine resolutions, including one on Measures to Promote Cultural Diversity and Protect Cultural Heritage in Asia, Asian Integration through Information and Communication Technology, Asian Parliamentarians Against Corruption, APA Women Parliamentarians, and Promoting Inter-Faith Dialogue, and Harmony among World Religions.

“Our Constitution is unique in many ways. It not only empowers the citizen, but also keeps religion and religious community out of politics. It is a gift from His Majesty The King, who enjoys the absolute confidence of his people,” he said.

The Constitution requires the state to promote conditions that will enable the pursuit of Gross National Happiness, a vision for development gifted to the world by His Majesty the Great Fourth, he said.

In the context of culture, the Constitution has a separate Article on Culture. In the GNH narrative, it is recognised that a decline in traditional heritage and cultural wisdom will lead to a weakened society.

Prime Minister Tshering Tobgay said there are grand objectives made when regional or international bodies meet, but too often much is forgotten after the event.

“In our region for instance, we talk of the vast resources, of cultural and historical ties, of similarities among the nations. We talk about commonalities, but our differences dominate. Quite often, our regional efforts are overshadowed by bilateral differences,” he said.

President of APA, Dr Nguon Nhel, said the meeting provided a platform for parliamentarians representing more than 60 percent of the world’s population to discuss and exchange ideas, perspectives and experiences to seek possible solutions and strategic approaches to address the regional and international challenges.

APA’s Secretary General, Dr Mohammad Reza Majidi, said the Asian countries are well-positioned to progress if parliamentary diplomacy was fully exploited in all its dimensions and manifestations.

The APA was initiated in 2006 from the Association of Asian Parliamentary for Peace, which was established in 1999. The APA comprise of 42 Member Parliaments and 170 members. Bhutan’s parliament has two seats in the APA.

The areas of interest and activity of the APA’s Standing Committee on Social and Cultural Affairs include cultural diversity, preventing trafficking of cultural objects, and promoting friendship and cooperation. Delegates from Bahrain, Russia, Turkey, Cyprus, Iraq, Iran, and Kuwait are attending the meeting.