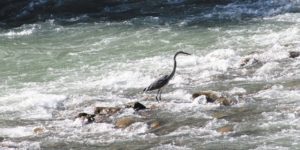 Forest fires, fishing activities, road construction and vehicular movement are some of the potential threats to the survival of White Bellied Herons (WBH) in the country.

Tsirang’s forestry officer, Chhimi Dorji, who carried out studies to assess the WBH habitat in Punatsangchhu and Harachhu in Wangduephodrang last year, said that there are about 26 herons in the country.

WBH is the second largest species of heron in the world and the International Union of Conservation of Nature (ICUN) has categorised WBH as critically endangered species.

The forestry officer said that understanding the habitat requirement of the species and conservation measures based on this study could ensure its long-time survival. “There are more attributes of WBH habitat like diet composition and prey availability, which could not be studied due to limited time.”

He said that future study could also focus on the pattern of resource utilisation to reduce the pressure of WBH in finding its prey.

He said that forest fire threatens the WBH nests directly and fire is a potential problem for reproduction. “Scars of fire were found in every sampling area.”

He said that foraging habitat of WBH seemed to be related to multiple channels of the river, relatively shallow water, availability of food and predator avoidance. WBH nesting was made on tall Chirpine trees, which were the only type of trees found within the area, he said.

It was found that Harachhu had fewer disturbance factors such as an absence of transmission lines, motor vehicle roads, bridges and agricultural land near the heron habitat. “However in heron feeding sites, lots of fishing activities occur,” Chhimi Dorji said.

He said that about 81 percent of respondents collected riverbed materials from the WBH habitat although the intensity was not high.

A senior ecologist at the Royal Society of Protection of Nature, Rebecca Pradhan, said that there are about 26 WBH in Bhutan, 23 in Myanmar and six in India.

She said that WBH cannot swim like other water birds and always walk along shallow water. “In the past, people used hands to dig sand, which didn’t affect the herons but as people use excavators, which dig deeper and this could lead to the loss of habitat.”