Drugyel Dzong rises from history as 40% is complete

You are here: Home » Blog » News » Drugyel Dzong rises from history as 40% is complete

The project manager for the Drugyel Dzong, Namgay Dorji said that around 40 percent of the structure of the historic Drugyel Dzong is complete.

Namgay said that the project is being personally supervised by the Prime Minister’s Office.

He said, “We send monthly financial and physical completion reports to the Prime Minister.” 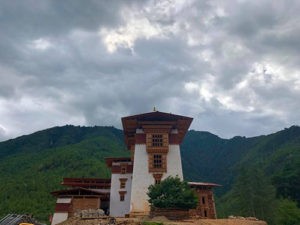 “If we face any problems we have been instructed by Lyonchhen to directly get in touch with the Cabinet Secretary or Cabinet Director who get the issues sorted out,” said Namgay.

Namgay said that in 2017 itself Lyonchhen personally visited the Dzong once every two months to monitor the construction while in 2018 with a busier schedule Lyonchhen has been visiting once every three months.

The Drugyel Dzong is the only Dzong in modern Bhutan which is being constructed out of the own internal funds of Bhutan without seeking any donor assistance. The Dzong budget is at around Nu 500 mn.

The Royal Command to rebuild the Dzong came on the same day as the birth of His Royal Highness The Gyalsey on 5th February 2016.

Upon the Royal Command of His Majesty; Lyonchhen graced the Salhang Tendrel Ceremony conducted on 6th February 2016.

Lyonchhen said, “It is a privilege and honor to be involved in rebuilding the Drugyel Dzong. There is a sense of history and it is very symbolic that we received the Royal Command to rebuild the Dzong on the same day as the birth of His Royal Highness The Gyalsey. It bodes extremely well for an auspicious future.”

Lyonchhen pointed out that the Dzong is being built in the exact likeness of the original Dzong and to do this a design team from the Ministry of Home and Cultural Affairs has poured over old picture sof the Dzong from every angle.

He said that it is also a celebration of architectural heritage and traditional building, which would bring together those skilled in the traditional arts.

Lyonchhen said that this is the only time in Bhutanese history where five Dzongs are being built simultaneously with the others being the Wangduephodrang Dzong, Denchi Dzong in Pemagatshel, Sarpang Dzong, Royal Academy Dzong in Paro and the Pangbisa Dzong.

Lyonchhen, while visiting the Drugyel Dzong reconstruction team to celebrate the birth of His Majesty the Fourth Druk Gyalpo on 11th November 2016 said that Drugyel Dzong is an important national monument.

Lyonchhen, at the time said, “Therefore, all of us should be proud to be part of rebuilding this important monument. This is an opportunity for us to pray for continuous national peace and progress even as we work and celebrate it as a culmination of our protected sovereignty under the successive Monarchs.”

Lyonchhen asked them at the time to attribute this as special prayer for the wellbeing of HRH Gyalsey.

Upon the request of Zhabdrung Ngawang Namgyal, Drugyel Dzong was built by the second Desi Tenzin Drukdra in 1649 to commemorate a victory over an invasion from Tibet that was repelled. In the early 1950s, the Drugyel Dzong caught fire and was destroyed almost completely.