Drukgyel dzong reconstruction to complete by 2022

You are here: Home » Blog » News » Drukgyel dzong reconstruction to complete by 2022 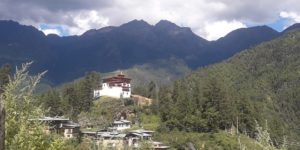 The reconstruction work at Drukgyel dzong in Paro is 40 percent complete, according to the project officials.

The work is estimated to complete by December 2022.

The reconstruction works began in April 2016 after the command of His Majesty The King to celebrate the birth of His Royal Highness (HRH) The Gyalsey, to commemorate the arrival of Zhabdrung Ngawang Namgyel in the country in 1616 AD and the birth year of Guru Rinpoche.

Utse, which is the main part of the dzong, was inaugurated last year coinciding with the first birthday of the HRH The Gyalsey. Utse’s reconstruction started on August 26 in 2016.

The project involves geotechnical work, topographical survey, model construction, dismantling of ruins, disposal of debris, and reconstruction among others.

The project manager, Namgay Dorji, said archaeological survey and soil tests were conducted for about three months in 2016 to restore and reconstruct the dzong.

“Two of the seven phases of the reconstruction project had been completed,” he said. “Workers are now occupied in the third and fourth phase.”

More than 200 Bhutanese are working at the site.

Works such as electrification, mud plastering, whitewashing and painting, fixation of the floorboard, door shutter and glass frames are being carried out on parts of the dzong, which are completed.

Stone slabs (Doleps) are also being laid at the basement and courtyards along with the construction of drainage system.

Namgay Dorji said an assessment would be carried out for the other parts of the dzong to check the strength of the walls and accordingly build on it or lay the foundation for construction.

He said that although the requirement is to work for eight hours, they work from 7:30am to 5pm. “They also work overtime from 5pm till 9pm every week except on Sundays.”

The project manager said their main challenge is the shortage of timber. “Lot of timber is needed for the roof. We manage from Haa.”

He said they do not have difficulties in availing of the stone and other materials needed for the construction.

Namgay Dorji said that Nu 500 Million (M) is allocated for the project and about Nu 116.255M was utilised until June this year. “We get a total of about Nu 50M a year.”

Built in 1649 to honor Bhutan’s victory over the combined forces of the military from Tibet and Mongolia, the dzong is believed to be the first of its kind. The dzong used to house sacred documents that were lost to a fire in 1951.