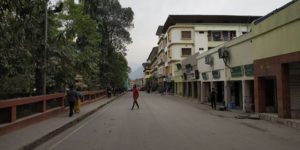 Two of the busiest lanes near the Zangtopelri lhakhang in Phuentsholing, Goede Lam and Tharpei Lam, are closed for traffic giving residents and visitors to the busy town a breath of fresh air.

The roads were closed for traffic since January 24. The move was considered after the new three-storied multicar parking was opened on January 11. About 150 parking spaces in the town were withheld and traffic markings were also erased to make them pedestrian lanes.

Phuentsholing thromde had announced vehicles would still be allowed about 10 minutes to load and unload. Children are making the best use of the open pace. On any given day, the two lanes are congested with the area being one of the busiest place in the town

Shop owners are saying the decision is affecting their business. At Goede Lam, the owner of Thukten General Shop said business was slow for the last two days.

“Usually, our clients don’t get parking space here,” she said, adding that it is a good move. “But nobody is coming now.”

The shopkeeper said many people would still not know of the changes, especially, the timings they are allowed to load their goods. Most of the clients are from villages and they don’t own private vehicles, she said, pointing taxis should be let in to drop and pick.

“As there are traffic cones to stop vehicles enter these lanes, most must have misunderstood,” she said.

At Tharpei Lam, the owner of Norzang Enterprises said the roads look clean without the vehicles. He said it was too early to say whether the business actually affected or not. People would feel the pinch after about a week’s time, he said.

Visitors are happy with the Thromde’s decision. “There should be a few places for people to walk freely,” said one. “Phuentsholing is so crowded. We need to pedestrianize some more roads to let shoppers enjoy.”

Another said that business would pick up and benefit in the long run as people would prefer walking in vehicle-free roads. “The business owners are panicking. The decision of the Thromde will benefit the general public and visitors.”