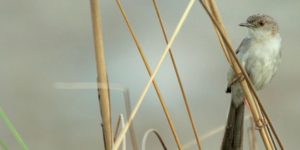 A sighting of a Graceful Prinia (Prinia gracilis) near the riverbank of Maokhola in Gelephu on May 13 has brought the number of bird species in the country to 722.

The Graceful Prinia is found in lowlands in tall grasses and shrubs especially by the wetland. It is a resident breeder in northeast Africa and southern Asia.

The 11-centimetre long Prinia falls under Cisticolidae under Genus of Prinia and species of Prinia Gracilis. “It has a streak sandy grey-brown upper part, white under part and cross-barred tail.”

A freelance tour guide Tshulthrim and his friends spotted the bird. Ornithologist at the Ugyen Wangchuck Institute for Conservation and Environment (UWICE), Sherub confirmed it as a new record.  “As soon as I was back to Thimphu from Gelephu, I submitted a picture of the bird to Sherub and he confirmed it as a new species in the country,” Tshulthrim said.

Tshulthrim and his friends, who were conducting bird count that day as a part of Global Big Day of birds, saw the Graceful Prinia in a group of three at the same spot at Maokhola.

Tshulthrim along with his friend, Kelzang Dorji who works as an extension supervisor with livestock department, Chencho Wangdi, an accountant with the National Museum, and a tour guide, Karma, travelled to Gelephu from Thimphu for the bird count.

“We started at 3am for birding that day,” he said.

Global Big Day is observed for birding to submit the checklist of birds that are observed to the largest database of birds, eBird, based in Ithaca, New York, United States of America.

According to a teacher at Bajo Higher Secondary School in Wangduephodrang, Tshering Tobgay, who is a keen bird watcher, it is a single day event, uniting birdwatchers worldwide across political boundaries and language barriers, all brought together by shared passion for birds.

It is the second consecutive year Bhutan has celebrated the event of bird watching on Global Big Day. Organised by interested birders through the social forum, ‘Birds of Bhutan,’ in Facebook, it brought together 48 interested birders from diverse background including students.

“It is important for a country like Bhutan to participate in this event to show case the country’s rich diversity of birds,” Tshering Tobgay said. “It will not only help people around the world to understand the type of birds in Bhutan but also have immense benefit in branding Bhutan’s tourism.”

A total of 354 bird species were recorded in a daylong event in 10 dzongkhags. The Oriental Bird Club based in the UK, UWICER in Bumthang and interested individuals from Bhutan sponsored the prizes.

International experts estimate Bhutan to have about 770 bird species.