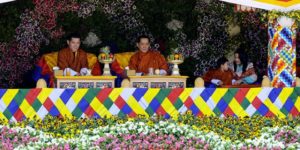 Hundreds of people are visiting the fifth Royal Bhutan Flower Exhibition, which His Majesty The King  inaugurated on February 21 at the Tendrelthang in Samdrupjongkhar.

His Majesty The Fourth Druk Gyalpo and members of the royal family also graced the exhibition. The Prime Minister, cabinet ministers, senior government officials and representatives of Samdrupjongkhar, the ambassador of India to Bhutan and officials from the neighbouring Indian state of Assam also attended the inauguration ceremony.

According to the press release from the royal office for media,this year’s exhibition was dedicated to the 39th birth anniversary of His Majesty The King and was organised by a committee led by the Samdrupjongkhar Thromde. Since June last year, the thromde and other stakeholders have been preparing for the exhibition, along with support from the volunteers.

To commemorate the birth anniversary, the organisers offered birthday cakes, while the members of the community from Samdrupcholing and Jomotshangkha drungkhag put together a cultural performance to open the exhibition. 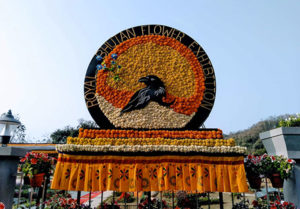 Ministry of agriculture, private nurseries, and the armed forces developed the gardens in the mainexhibition centre. Besides the gardens, the exhibition has stalls displaying local artists’ works and souvenirs, traditional medicine, tourism information booth and food courts run by entrepreneurs.

Unlike in the past, this year’s exhibition extends beyond the main exhibition centre to include the entire thromde areas. Gardens and stalls have been developed at various parts of the town and people have actively participated in the transformation of the town, by putting up their own floral arrangements around their homes.

The press release stated that the gardens developed outside of the Tendrelthang would be permanent features of the town following the conclusion of the exhibition, as one of the overarching objectives of the exhibition is to bring about lasting transformation of living spaces.

A resident, Dorji Dema, was found sitting in one of the corners and looking at all the flower gardens and stalls. “I do not know what to do so I am just relaxing the happiness of being able to meet Their Majesties and royal family members for the first time since I was born,” she said.

She said it is good to visit Samdrupjongkhar as the whole town has become clean and looks different.

A local healer, Singay Dorji, 66, from Wangphu gewog, said he has displayed medicinal herbs and received good response from people as many of them requested him for treatment. “I gave them my contact details.” He said he had been practicing traditional healing for more than 40 years.

The exhibition was initiated on Royal Command in 2015, with the vision of fostering beautiful living spaces and promoting economic activity. The flower exhibition will remain open until February 27.