His Majesty The King in Pemagatshel

You are here: Home » Blog » News » His Majesty The King in Pemagatshel 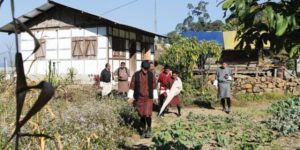 The village is populated by 51 households from the most remote regions of Nganglam gewog in Pemagatshel. As part of the project, which commenced in 2012, the people were granted plots to build houses in addition to farmlands, and received assistance to build their houses and for agriculture. Today, 13 households have piggeries, and all 51 have poultry. People grow maize and cash crops like cardamom, oranges, and ginger. A non-formal education centre set up in the village is attended by 12 people. The village also has a BHU and a community lhakhang dedicated to Zhabdrung Toenpa and Guru Rinpoche.

There are four other similar projects being implemented across the country: Khenadrang in Pemagatshel, Ney in Lhuentse, Dawathang in Samdrup Jongkhar, and Bebji in Haa.

The projects have enabled people from the most inaccessible parts of the country to be connected to road, electricity, and water, and given them the opportunity to educate their children and access basic healthcare easily. Inhabitants report that their standard of living has improved immeasurably, and they look forward to the future of their children with a great deal of hope.

His Majesty The King travelled from Gelephu through Kanamakra outpost to Manas on January 19, to inspect the border and the Manas Wildlife Sanctuary, before arriving in Nganglam.

His Majesty The King will spend the next few days in the region, and celebrate Daw Chunyipai Losar with the people of Samdrup Jongkhar.

His Majesty The King is accompanied by His Royal Highness Gyaltshab Jigme Dorji Wangchuck.