His Majesty The King in Punakha

You are here: Home » Blog » News » His Majesty The King in Punakha 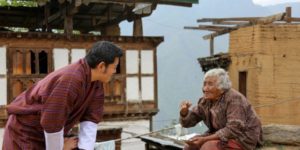 His Majesty The King yesterday visited the homes and met with the people of Sirigang in Kabjisa, Punakha, who were affected by a windstorm last week. The windstorm on April 18 damaged more than 300 houses in Punakha. The government’s immediate relief efforts were supported by the dzongkhag, armed forces, and DeSuups.

The affected households, most of whom have already received insurance claims, are at the moment engaged in rebuilding damaged structures.

His Majesty The King  also granted an Audience to the participants of the 24th DeSuung Voluntary Training Programme, in Tencholing yesterday. The 120 men and women volunteers began their  five-week training from March 27.

When they complete their training on April 29, they will be a part of 2,886 DeSuups who have undergone the training since 2011. Since then, DeSuups have made important contributions during times of disasters or national events. His Majesty also visited Punakha Central School, and Dechentsemo Central School in Thinleygang, and met with the students.