Hoentey, the New-Year delicacy for Haa

You are here: Home » Blog » News » Hoentey, the New-Year delicacy for Haa

For the past three days, Tshering Gyem and her two girls had one profound duty to perform: make the most delicious Hoentey for their new year celebrations, Lomba, which coincides with the National Day tomorrow.

People from Haa and Paro will celebrate their New Year, Lomba, on December 17. But for those in Haa this year the occasion assumes extraordinary significance and charm. 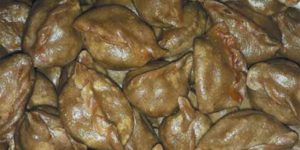 His Majesty The King and members of the Royal Family will celebrate the National Day at the newly constructed Lhakhang Karpo in Haa. It marks the day their leaders, along with those from other regions of unified Bhutan, committed unconditional allegiance to the Wangchuck Dynasty at the Pungthang Dewachenpoi Phodrang dzong.

Lomba for the people of Haa is no less important.

Hoentey is a sweet buckwheat or refined flour dumpling stuffed with a mixture of turnip leaves, amaranth seeds (zimtse), cottage cheese, butter that is seasoned with chili powder, onion and ginger. It is their New Year delicacy during Lomba.

The three kneaded more than 30 kilogrammes of refined flour, buckwheat, and steamed 1,000 pieces of Hoentey.

One of them rolls the dough into an evenly spread ciricle while the other two stuff the mixture, seal the dumpling and carefully place them in a huge steaming container. The vegetable and spices are fried in a pool of oil and a lavish touch of salt to enhance taste.

As the day nears dusk, the three are almost done. From the last few pots, Tshering Gyem checks the dumplings to see if they are cooked enough, takes them out and packs them in clean casseroles. Her husband, Sonam Tshering takes over. He runs around distributing the dumplings to their neighbours and civil servant friends, who are not from Haa and do not prepare the dumplings.

All visitors to their place are served a plateful of hot steaming or fried Hoenteys.

Seventy-one year old, Phub Tshering from Dumchoe misses the taste dumplings prepared during his days. “Nothing could be better than those dumplings of our time,” he said.

He said Hoentey today has changed in taste as most of the naturally grown or those collected from the wild ingredients are replaced with imported ones.

“Only few use sweet buckwheat (Gay rey) and they mostly used refined oil not butter,” he said. “One reason is because people’s health restrict certain foods and avoid butter.”

Those days, he said, more than eating Hoentey, it was the process of making it that was exciting.

“We collect butter, cheese and other dairy products from the highlands before to make Hoentey; we had many yaks then,” he said.

The women would dry garlic, collect wild fruits that have seeds like pumpkin, which are crushed to garnish the stuffing and grind flour from locally grown sweet buckwheat.

“We collect bamboo products from the south, mainly Samtse, exchange them with rice, chillies, and earthen pots in Punakha,” Phub Tshering said. “There was no modern steaming pots, so we used to boil the Hoentey in those earthern pots. In case we slip, fall and break the earthen pots, we have to return all the way to Punakha to fetch the pots,” he chuckles.

Jampel Dorji, 61, from Takchu Goenpa recalls looking forward to this delicacy as a child. “The dumplings are made once in a year, so they appear to taste delicious,” he said.

Today, it is made in plenty round the year.

The main ingredients of these delicacies are similar: butter, amaranth seeds chilli, cheese, and salt.

Like all households, Tshering Gyem’s family will deposit their 100 pieces of Hoentey to the dzongkhag administration to be served on the National Day. Satisfied with how they have turned out, she hands over the utensils to the girls for cleaning. The woman of the house has fulfilled one of the main duties of the year.