You are here: Home » Blog » News » Hotels get first organic produce from Gasa 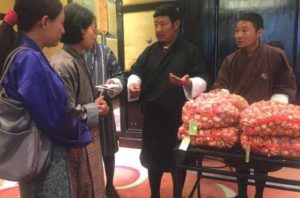 Gasa dzongdag Dorji Dhradhul and representatives of the farmers’ group distributed 150kgs of garlic and 90kgs of carrots to a group of hotel owners in Thimphu.

The group charges Nu 123 for a kilogram of garlic and Nu 63 a kilogram for carrot. The cost is inclusive of Nu 3 for transportation and the daily allowance of farmers bringing the produce to Thimphu. From next month, the group will supply potatoes at Nu 31 a kilogram.

The group, established in 2004, became operational only recently. The vegetables from Gasa were declared organic about 10 years ago.

On February 9, the cooperative secured its first biggest commercial deal when it signed a memorandum of understanding (MoU) with 11 major hotels and restaurants in Thimphu, including Aman Kora, Taj Tashi, Druk Hotel, Termalinca, Hotel Ariya, and Pedling.

Hotel Taj Tashi manager, Tashi, said she is hoping the group would help her hotel meet the high demand for organic local produce. “The problem is that the supply chain is not consistent and the produce is expensive,” she said.

The group agreed to supply 220kgs of carrot, 76kgs of garlic and 1,445kgs of potatoes a week on Wednesdays to the hotels.

The cooperative is the first certified organic grower’s group of Khatoe gewog, Gasa. The gewog, located at an altitude between 2,300 and 2,900m above sea level, has 60 households of which 56 are engaged in farming. Fifty-one households grow organic potatoes.

While Bhutan Agriculture and Food Regulatory Authority (BAFRA) certified potato and garlic as organic produce, the carrot will also be certified soon.

Gasa dzongdag Dorji Dhradhul said the carrot cultivation also follows the management practice, which is in line with organic production.

He said the first harvest after the MoU and its distribution was a giant step towards the dzongkhag’s journey in achieving self-reliance.

The group has the capacity to produce more than 92 metric tonnes (MT) of potatoes and 3MT of garlic each year with scope for further expansion.

The Department of Agricultural Marketing and Cooperatives, and the National Organic Programme, and BAFRA supports the farmers.