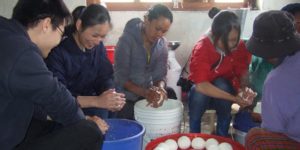 It was an experience for the three Japanese students who spent a week in the remote village of Shingkhar in Ura, Bumthang.

Sarono Sugiyama, Yuka Miura and Hinata Sogabe, the three students from Konan University are used to the hustle and bustle of Okamato, Japan. Shingkhar, mesmerised the three young Japanese who claim that it was a “lifetime opportunity” to explore happiness in its true essence.

“We have realised that materialistic wellbeing is not important. The religious outlook based on Buddhism is so strong and this could be the secret behind a happy Bhutan,” said Hinata Sogabe.

The students however found it quite unusual that people didn’t bathe everyday, like they did in Japan. “But they were very kind to arrange a hot stone bath for us,” Sarono Sugiyama said adding that in Japan people have to pay for everything.

A week away from their gadgets and networked world, the students said the trip gave them a chance to explore a completely different aspect of their lives. “There was strong vitality in the community to help each other and celebrate every moment,” Yuka Miura said.

What brought them to Shingkhar was a university programme led by their Professor K Masaki, who is not new to Bhutan.

He first came to Bhutan in 2004 through a JICA project and in 2006 he was the advisor to JICA on a local governance project in Bhutan. The professor is in close acquaintance with an informal association called the Shingkhar Dechenling Phendey Thuentshog. Since 2006, K Masaki has been visiting Shingkhar whenever he visits Bhutan.

He wanted to do something for the community and got the support of JICA and Konan University. He claims that this is the first JICA project that is a mini programme targeting 89 households and focused on one chiwog.

With a fund of Yen 10M (equivalent to Nu 6M) from JICA, the programme has revived a milk-processing unit, conserved two water mills and built a flood protection wall along a small stream.

K Masaki said the milk-processing unit was almost defunct and the structure was giving up. The project installed new equipment and renovated the structure. 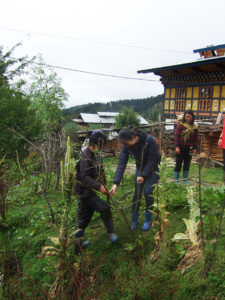 The project has not only revived the cooperative but also trained five youth as a leader of the cooperative. These youth would be invited to Japan to master milk processing skills.

Except during the three winter months, each household provides about seven litres of milk to the processing unit. K Masaki said that each household is paid Nu 18 to Nu 20 a litre. This is being revised to Nu 35 a litre.

The bigger idea, he said is to bring students from Japan and make them experience rural Bhutan, which they have never experienced. “Every small gesture my students experienced is  very special,” he said.

The three students, he said would be the guide to the future students visiting Shingkhar and they have been selected through an open competition among 30 students who applied.

The funding was proposed two years ago and the two and half year long project began in April this year. Except for the flood protection wall, the rest have been almost completed.

The outline of the project stated that it is in rural communities where people live in close touch with nature and their neighbours, and where better appreciation on spiritual and emotional wellbeing is being embraced.

It is against this background, K Masaki said the project in Singkhar is to assist people to enhance their incomes, and revitalise their collective activities, both of which constitute the mainstay of rural livelihoods. “Shingkhar will be an excellent model for other chiwogs, given its rich cultural and spiritual heritage,” he said.