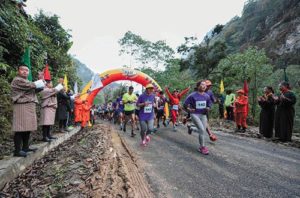 About 369 participants completed the fifth Bhutan International Marathon that was held in Punakha on March 3.

Two soldiers, Duptho Wangchuk of the Royal Bhutan Army (RBA) and Kinley Gyeltshen of the Royal Body Guards (RBG), came second and third by completing the race in 2:47:07 and 2:54:14 respectively.

In the female’s full marathon category, Sarah Easton, 30, stood first by completing the race in 3:42:17. She is a professional athlete who runs for charity to raise funds for refugees of Myanmar. The race was her first at such altitude. The race started at 6,700ft.

Ursula Schulz and Pema Zam bagged the second and third position by completing the race in 4:11:50 and 4:43:23 respectively.

The race started from Tashithang in Gasa and ended at the Punakha Dzong parking, detouring from Changyul towards the cremation ground and following the trail that leads to the 300ft suspension bridge and the Samdingkha road towards Kuruthang.

In the half marathon, three RBA soldiers, Phurpa, Nima Dorji and Kinley Tenzin, were the winners. Phurpa completed the race in 1:18:46, where as Nima and Kinley took 1:18:54 and 1:19:11 respectivelty.

In the female half category, Jocelyn Bradley, who took 1:40:14, won the race followed by a teacher of Thimphu Primary School, Juliana Mamola. She took 1:44:14 seconds to complete the race.

The half marathon started from the Sirigang in Kabisa.

Of the 419 people participated in the race but some did not complete by the scheduled time, which was from 8am to 3pm.

There were 277 international and 142 national participants, of which 73 were above 50 years.