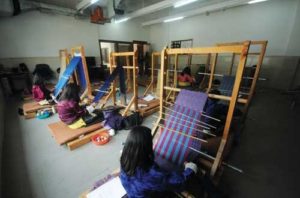 Main story: In one of the warmest rooms inside Royal Textile Academy (RTA) in Thimphu, twenty-five young girls ranging from as young as 11 to 21 years old are learning something valuable – the art of traditional weaving.

Instead of spending their time roaming around town or sitting in front of television, they are spending their winter vacation learning the age-old weaving, a skill that has been passed down through generations.

The youngest of them is Kinzang Dolkar, 11, studying in Changzamtog Lower Secondary School. With short hair and prettiest of smiles, Kinzang Dolkar learnt weaving from her mother since she was six years old.

Today at RTA, Kinzang Dolkar is perfecting the art of weaving scarves. She has managed to draw attention from tourists who visit RTA. Many looked surprised to find a young girl weaving.

It’s easy to weave and one can spend one’s time productively, Kinzang Dolkar said. “I want to become a doctor when I am older. If not, I will become a weaver. I will be able to earn from selling the clothes that I weave.”
Kinzang Dolkar’s mother, Sangay Wangmo, 35, has been working as a weaver at RTA for the past one year. She is accompanying her daughter and assisting other young girls at the centre.

“From a very young age, my daughter was interested in weaving. Maybe it’s because she was always surrounded by weavers,” Sangay Wangmo said. “Today, most of the young girls are not interested in weaving, which was unheard of when I was growing up. Every girl and woman in my village used to weave. They do even to this day.”

Sangay Wangmo recalled that when she was young a kuswhuthara, an intricately patterned kira with complicated designs, cost Nu 2,000. 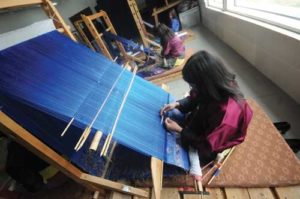 “Today, one can earn more than Nu 50,000 depending on the complexity of the patterns. If one can’t get a good job, one can easily be able to earn by weaving. That is reason why I taught my daughter to weave as well,” Sangay Wangmo said.

“Such training is important for girls like us to learn about weaving and to uphold this unique culture. I plan to continue weaving even during the weekends after school resumes,” Tshering Dukar said.

Tshering Dukar had woven mufflers and traditional belts for her family members even before she attended the training programme. It was her grandmother who taught her how to weave.

More than three decades ago, it was common to find young girls and women knowing and developing the art of weaving – the younger ones usually guided by their elders. It was the time when young girls were brought up knowing how to wind a yarn by hands and learning the colour combination that will go into a making a textile.

Abi Karma, 75, living in Olakha with her daughter, can clearly recall how she learnt weaving from her mother when she was just nine years old. There wasn’t even a single household in her village where women didn’t know the art of weaving, Abi Karma recalled. “Every girl, be it young or old, knew who to weave. Some knew how to weave the intricate patterned textile and we used to respect them for their skills.”

This culture of learning weaving at home and passing the skills down to their daughters have changed tremendously over the years, Abi Karma observed. “Today, with development, younger generations are finding something else to keep them occupied and weaving is at a risk of disappearing. Even mothers are now not weaving but wearing the cheaper garments available in the market.” 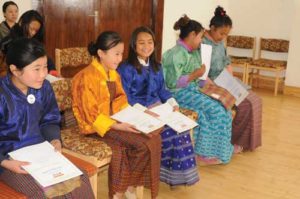 Cloth is an integral part of our culture, it represents the social status and wealth of a person, Abi Karma said. “More than that, for me, weaving has been a ritual of love and endurance that comes from the heart. It is a spiritual exercise and devotion, which is represented through selection of colours and patterns that goes into creating a textile.”

For Abi Karma, weaving was a lifelong passion, which she couldn’t continue after her eyesight failed. “Had it not been for my eye, I would have continued weaving.”

The programme is targeted to productively engage the students and to train them in the art of weaving during their holidays. Students are provided with necessary weaving tools and materials from the centre as well as a minimum stipend to purchase their school necessities, Rinzin Dema said.

“We are happy that the younger generations are taking keen interest in this traditional art and we look forward to more participation from young people in the coming years, Rinzin Dema said.