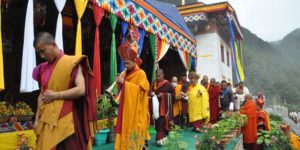 The people of Haa valley came together on June 16 to celebrate the consecration of Lhakhang Karpo, the bastion of the valley’s revered guardian deity, Ap Chhundu.

For the people of Haa, the grandeur of 120-year old lhakhang was elevated to its formal glory after waiting for more than eight years.

Invoking blessings and the essence of the wisdom of Dragmar and Tshepamey, His Holiness the Je Khenpo, Trulku Jigme Choedra consecrated the reconstructed Lhakhang Karpo. The lhakhang houses sacred images of Tshepamey and Ap Chhundu.

His Majesty The King, during his visit to Lhakhang Karpo on November 10, 2009, commanded total reconstruction of the lhakhang.

The reconstruction was carried out departmentally by the dzongkhag administration from 2010 with the demolition of two old  (monks living quarters) and completed in November 2017.

The main lhakhang, which houses the statues of Tshepamey and Ap Chhundu, was retained in original form with the construction of surrounding walls and railing. However, the major work was the construction of two on the sides of a U-shaped building and another one behind the main temple.

Haa dzongdag Kinzang Dorji said that the total cost for the reconstruction project in 2010 was estimated at Nu 150 million (M). “But we managed to complete the project at Nu 149M although the reconstruction was delayed by more than four years after being mired in controversies of corruption,” he said.

Dzongdag Kinzang Dorji said the estimated cost could have increased as the project took almost eight years to complete. “However, surprisingly the final cost of the project after completion was Nu 149M only although several structures not included in the plan like a 12-unit public toilet, a dining hall for monks, an additional wall, railing and public galleries, were also constructed,” he told Kuensel.

The other construction work not included in the project, according to the dzongdag Kinzang, is a water tank, which has a capacity of 250,000 litres of water. He also said that a complete set of gym for the monks is also installed at the dratshang, which has about 98 monks today.

Dzongkhag Tshogdu chairman Thinley said that the current dzongdag expedited the construction works after he took office. “We have every reason to be happy because it is here at the lhakhang where Their Majesties and royal family celebrated the 110th National Day last year with the people of Haa and now His Holiness the Je Khenpo consecrated and sanctified one of the oldest and sacred monasteries in Bhutan.”

The Lhakhang Karpo, the white temple 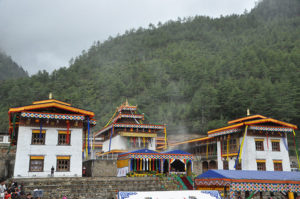 The history of Lhakhang Karpo can be traced back to the 7th century A.D. when it was constructed in Haa coinciding with the rule of King Songtsen Gampo in Tibet during this era.

The King was actively involved in spreading Buddhism. As atonement for a sin, King Songtsen Gampo took upon himself the task of constructing 108 temples in all the countries of the Dzambudvipa. Among these constructions besides Kyichu lhakhang of Paro and Jampa lhakhang of Bumthang is said to have included the other two important temples in Haa, the Lhakhang Karpo (white temple) and Lhakhang Nagpo (Black temple).

Legend among the Bhutanese, go that King Songsten Gampo being religious person transformed himself into a white and a black pigeon, and the white landed there where the temple appeared on its own through his miraculous powers. It is also believed that the temple was built by people who apparently appeared out of nowhere (Haa Tohm- meaning all of a sudden) and the name of the valley Haa then is partially derived from the term Haa Tohm.

There is another version of how Haa came by its unique name. The naming of the valley emerged from the exclamation expressed by people upon first beholding the breathtaking sight of the Meri Puensum, the three high hills venerated as Rigsum Goenpo that are unusually alike in appearance and rising imposingly in a straight line from the Haa Chhu.

The hill on the right is supposed to be the sacred ground for Jampelyang, the center for Chenrizig and the left one for Chana Dorji. Much of the history of the valley is rooted around Lhakhang Karpo and Lhakhang Nagpo. Lhakhang Nagpo stands a little north as the guardian sentinel keeping watch at the south entrance of the valley.

It is also believed that Guru Rinpoche shielded the valley from the evil forces inherent in the world by uttering the powerful mantra- Haa. Hence the name given to it.

The main nangten of Lhakhang Karpo is a large statue of Sangye Tshepamey (Buddha Amitayus) place at the centre of the one-storied temple. According to legend, the sculptor assigned the task of moulding the statue of Tshepamey could not craft a head to match the body. After many attempts, the sculptor had resigned himself to failure and was bathing outside the temple when a man appeared carrying a basket. Inside the basket was the head of a statue that the man said he wanted to barter. The sculptor took the head inside and placed it on the body of the statue. It was a perfect fit. In his happiness he turned to offer a fair exchange but the man had disappeared.

People believe that the man with the basket was their protecting deity, Ap Chhundu. Believed to be a manifestation of the wrathful Vajra Panja, Ap Chhundu is one of the most important protecting deities of the country and a birth deity of all those who are born in Haa valley.