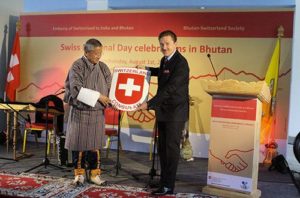 Coinciding with the 727th national day celebrations of Switzerland, the office of the Honorary Consul of Switzerland was opened in Thimphu yesterday.

Former minister Kinzang Dorji, who has been serving as the president of the Bhutan-Switzerland Society, was appointed the first Honorary Consul.

While His Late Majesty tried to find good examples or solutions to uplift the socio-economic conditions of the Bhutanese, his friend Fritz von Schulthess responded in equal measure investing huge sums of his personal finance and setting up Pro-Bhutan Foundation to help Bhutan and her people. The two small countries were never colonised.

“The challenge that I see ahead now is, therefore, how to try and sustain the sacred legacy that we have inherited and at the same time try to enhance our existing ties of close friendship, exemplary understanding and mutually beneficial cooperation between our two countries sans development cooperation which was the main pillar of our bilateral relations so far,” lyonpo Kinzang Dorji said.

After more than 35 years, the Swiss Agency for Development and Cooperation withdrew from Bhutan 18 months ago.

“But let me assure you that Switzerland is here to stay and be active, no longer as a development partner but as one half of a full-fledge partnership between equals,” the Ambassador of Switzerland to Bhutan Dr Andreas Baum said.

A Swiss business delegation will visit Bhutan in spring next year.

The Chief Justice, government secretaries, and other members from government and non-government organisations attended the event.