The new Cantilever Bridge of Punakha in the Kingdom of Bhutan

You are here: Home » Blog » News » The new Cantilever Bridge of Punakha in the Kingdom of Bhutan

The original roofed wooden cantilever bridge, built together with the Dzong in the 17th century; was washed away by a flood in 1958. The new roofed bridge was an enormous technical challenge as the original bridge had a span of only 35 meters! The new bridge has also been constructed of wood, but now has a free span of 55 meters: due to the widening of the river by 20 meters by the mentioned flood. With a width of 3.4 meters, the bridge will be for the use of persons and cattle only. 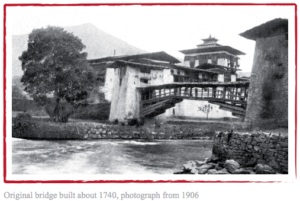 Much technical detail research by our “Pro Bhutan” Project Co-ordinator Fritz Baumgartner was necessary, as no bridge in this traditional wooden cantilever technique and with similar dimensions has been built in the last 100 years or longer.

Without the assistance of an experienced engineering company, experts in designing long span bridges, responsible technical planning of the future Punakha bazam could not be achieved. Walt +Galmarini AG – Dipl. Bauingenieure ETH SIA USIC, Zurich, a world wide renowned engineering company specialized, among many other complicated constructions with large span, in designing bridges of all kind, helped: it generously accepted to design the new Punakha bazam  in traditional architecture combined with most modern technology; their responsible engineer was Mr. Wofram Kuebler. Prof. Juerg Speerli of a Swiss Technical University designed the river bank protection against possible floods by glacier lake bursts. 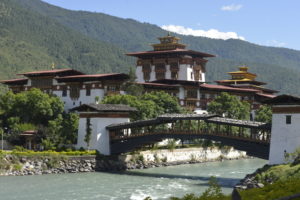 This new bridge, replacing the ungainly improvisation, the steel cable bridge in place for almost half a century, now has completed the majestic beauty of the holy Punakha Dzong where the founder of Bhutan, Shabdrung Ngawang Namgyal lies embalmed in state and is venerated as a living God, where His Holiness Je Khenpo resides with more than 500 monks in winter, where all the Kings of Bhutan were and will be coronated.

Accordingly, the “Pro Bhutan” bridge was instrumental at the coronation of the new King of Bhutan, His Majesty Jigme Khesar Namgyel Wangchuck, in the Punakha Dzong, on 1. November, 2008. As the new bridge has given back to this holy Dzong of the Kings of Bhutan its beauty and dignity, it has also been recognised by His Majesty the King and by the Royal Bhutanese Government as a prominent contribution to the celebrations of the jubilee „100 Years Wangchuck Monarchy“ during the course of 2008 and 2009.