Monarchy – the Strength of the Past, Present, and Future

You are here: Home » Blog » News » Monarchy – the Strength of the Past, Present, and Future 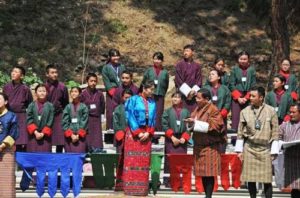 After an eight-day visit to Bhutan, Her Imperial Highness Princess Mako Naishinnō of Japan leaves the kingdom with an impression that more than fulfilled a life-long dream. Bhutan brought alive the interests and values she cherishes – a culture steeped in tradition, a pristine natural environment, and a sense of nostalgia-enhanced by her passion for history and mythology.

Her Imperial Highness Princess Mako Naishinnō is the oldest daughter of Prince Akishino and Princess Kiko, and the Imperial Grandchild of Emperor Akihito, the 125th Emperor of the Yamato dynasty. She is a highly qualified professional from universities in Japan and the United Kingdom, with specialized interests in Culture, Arts and Crafts, Mythology, and Museum Studies and is an Affiliate Researcher of The University Museum at the University of Tokyo.

As a direct descendant of the Imperial Family, Her Imperial Highness attends court ceremonies and functions at the Imperial Palace, official events around Japan, and represents her country at important diplomatic events abroad. With her involvement in sports and crafts, she assumed the role of the Honorary Patron of the Japan Tennis Association and the role of Patron of the Japan Kōgei (Arts, Crafts) Association.

The Imperial House of Japan – the Imperial Family – comprises members of the family of the reigning Emperor of Japan. The present Constitution of Japan describes the Emperor as “the symbol of the State and of the unity of the people”, deriving his position from the will of the people.

Apart from ceremonial functions, the Emperor – as the Head of State – is briefed on national affairs by the government of the day but the Imperial views and comments are not publicized. He is also the highest authority of the Shinto religion.

The Japanese Monarchy is the oldest continuous hereditary monarchy in the world and the Imperial House recognizes 125 Monarchs, from the legendary Emperor Jimmu (traditionally dated to 11 February 660 BC) to Emperor Akihito. The institution has played a vital role in shaping Japanese history.

Japanese nationals, mostly tourists, have been among the majority of foreigners visiting Bhutan since the kingdom opened up to the world. Dasho Keiji Nishioka, who first came to Bhutan as a Colombo Plan expert in 1964, is fondly rememberd for his contribution to farm mechanisation and the development of agriculture in Bhutan. It has been 31 years since Bhutan and Japan established diplomatic ties and an increasing number of Bhutanese are now going to Japan to study in schools and universities and programmes established by the government of Japan and other organisations.

For the Bhutanese people, Japan means a source of the best quality mechanisation including motor vehicles, power tillers, construction equipment, and all forms of modern technology.

Thousands of Japanese tourists say that Bhutan reminds them of what Japan must have once been like. For them it is a trip back into time. Both are Buddhist countries with a King and Emperor as symbols of unity. There is a cultural connection that does not come from the research of scholars or in the historical libraries, but in uncanny similarities that one might hear in a small noodle house over cups of hot shochu that tastes like ara. For example, when Japanese men introduce their wives to a friend or business partner they say, “Please meet my gusai,” meaning my foolish or ugly wife. Bhutanese women say “My husband is a tsagay (idiot).” Although there is a gender difference here the intended social modesty is the same. It is common in both cultures to lay a major feast for a guest and apologise for “such a simple meal”.

An insight into the real connection between the values of the two societies is found in history. For example, a four-hour Japanese kabuki play set in a village school is the story of a nobleman who sacrifices his son out of his love and loyalty for his King. It can reduce a sensitive Bhutanese to tears. Bhutanese people can still identify with this depth of human relationship and value, but a sadder similarity is that such nobility is now largely being confined to mythology.

With Bhutan venturing into an era of dramatic political change the history of the two countries emanate a strange nostalgia, going back to the Meiji restoration period after 1868. Japan and Bhutan seem like two similar worlds, 150 years apart. With the advantage of hindsight, Bhutan decided that modernisation was not westernisation while Japan then opted to westernise, but some similarities are amazing.

In recent years Japanese intellectuals and journalists have taken an interest in Gross National Happiness as a higher goal for human development. This can be an educative exchange because Japanese society, as interpreted by its critics, has wealth and a fair share of unhappiness. Bhutan is financially poor but claims to be happy. It will be an interesting human experiment if the two societies seek a meeting point. Will the two countries become rich and happy or end up being poor and unhappy?

The Aura Of The Monarchy

But the most fascinating aspect of Bhutan-Japan relations is the institutions of Monarchy that carry a sacred aura in both countries. In recent memory there has been a fairly regular exchange of Royal visits by members of the Royal family of Bhutan and the Imperial Family of Japan.

His Majesty King Jigme Singye Wanghcuck, attended the funeral ceremony of Emperor Hirohito and was warmly welcomed again for the Enthronement of Emperor Akihito in 1989. More recently, vivid images of His Majesty The King and Her Majesty The Gyaltsuen dominated the social media as the first State Guests following the Great Eastern Earthquake in 2011. Their Majesties won the hearts of the Japanese people as they met with his Imperial Highness Prince Naruhito and Her Imperial Highness the Empress of Japan, and visited Fukushima in the aftermath of the earthquake. His Majesty the King addressed the Diet.

In 1987, His Imperial Highness Prince Naruhito charmed the Bhutanese people with the first ever Imperial visit to Bhutan. Their Imperial Highnesses Prince Akishino and Princess Kiko Akishino also visited Bhutan in 1997 as special guests of Bhutan’s Royal Family. The interaction between the Imperial visitors and members of Bhutan’s Royal Family remain the foundation of the extremely strong bonds between the Royal Families and, therefore, the two countries.

The stories of Royalty throughout history have been important chapters in the evolution of nations and societies. They have been recorded and told with drama and sensation that far outweigh fiction. The most extraordinary moments of history unfolded during the reigns of Kings and Emperors, moments that transformed the story of mankind itself.

In that sense, Monarchies carry the heavy nostalgia of history. It was the decisions of Monarchs that led to eras of turbulent wars as well as of profound peace and of great cultural and spiritual movements. The charisma of the Institution and moral authority of Kings and Emperors sustained Royal lineages as the only true national institutions.

Even as Monarchs are recognized as bastions of ancient cultures and traditions, they are also at the forefront of modernization and the future. Philosophy and political theories have enthralled many thinkers with the relevance of Monarchy in modern times. As Kings intersect politics and ceremony, some argue that this Institution is becoming more important with time.

The relationship between Monarchy and Democracy, for example, is a topic of profound discourse and political theory. The German philosopher, Hegel, famously noted that Constitutional Monarchy today represents institutional continuity, symbolizes national culture, embodies unity of the state, and most important, enables human freedom.

Yes, there are critics of absolute authority, with good reason. That is why the role of Monarchy has been redefined in the context of democratization. In the transition from absolute Monarchy to democracy – against the tide of political, economic, cultural social transformation – the Monarch provides the stability. Only a sovereign Monarch can represent the state, being above all forms of politics and is best able to steer a country through crises

In the context of Constitutional construction, when societies go through massive turbulence, it is the figure of a Monarch and not an elected President who personifies stability and security. The world will not forget the imagery of Gen Suchinda Kraprayoon and Chamlong Srimuang of Thailand crawling to His Majesty King Bhumibol Adulyadej in 1992 and kneeling before the Monarch to be publicly admonished for their political rivalry. It ended a violent era of Thai political history.

Academics, philosophers, political analysts all agree on the potency of the Monarch’s soft power. There are many examples of countries where potentially fatal turmoil was calmed by the leadership and guidance of a Monarch. Hegel argued that Monarchy, as a long-standing institution, is the most rational form of government, a safety net, and the best guarantee of public freedom “for the Monarch symbolises the universal will of the sovereign state against the particular will of individuals”. He argued that Monarchy is particularly well equipped to embody national character and Constitutional continuity as it is linked to the country’s history for generations.

A Discourse That Continues

But this is, by no means, the end of political thought and discourse on Monarchy. Recent news that Her Imperial Highness Princess Mako will become engaged to 25-year old Kei Komuro, a former college friend, has re-opened an age old debate that is vibrant, not just in Japan, but on other Monarchies around the world, both East and West. Her Imperial Highness gives up her Imperial status by marrying a “commoner”, meaning someone who is not Royal.

The political leadership in Japan, in both the ruling and opposition parties, has agreed to urge the government to consider establishing new branches within the Imperial Family system for female members. Currently, the Imperial House Law only allows male members to establish their own branches and makes it impossible for female members to ascend to the Chrysanthemum Throne. The concern is not just a gender debate but the continuity of the Institutions.

The tradition of an unbroken male bloodline has been found to have its own problems and countries are considering the issues to secure stable Royal succession by female succession to the Throne and, thereby, stabilizing the sacred Institution of Monarchy where real sovereignty lies.