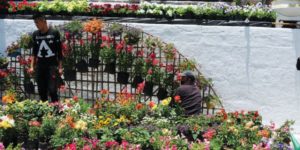 The third Royal Bhutan Flower Exhibition will be held at the National Memorial Choeten in Thimphu from June 4 to 11.

Her Majesty The Gyaltsuen will grace the opening of the exhibition. The exhibition will be open to public from June 5 to 11.

The exhibition is dedicated to His Majesty The Third King Jigme Dorji Wangchuck.

The exhibition will have more than 20 thematic gardens, prepared by about ten agency participants, including the armed forces, Ministry of Agriculture and Forests, Green Bhutan, private florists, and representatives from Japan, Thailand, and India.

The gardens will display Bhutan’s rich indigenous plants and herbs, as well as a large variety of ornamental flowers.

Programme director with the agriculture ministry’s information and communication services division, Singye Wangmo, said that while the exhibition is free to the Bhutanese, non-Bhutanese adults and students will be charged Nu 300 and Nu 150 each to visit the exhibition.

“Non-Bhutanese children below the age of five don’t have to pay the amount,” added Singye Wangmo.

Seedlings, gardening tools, cut flowers and souvenirs such as pictorial book on the exhibition, caps, and cups will be available for purchase at the stalls located in the parking space between the national referral hospital and Bhutan Insurance Limited office. The experts will also be there to provide useful information and to share gardening tips.

Agriculture Secretary Rinzin Dorji said that the area would accommodate only a certain number of visitors. “Crowd control is our biggest worry.”

The exhibition will be open from 9am until 8pm for a week starting June 5. “We extended the time for the benefit of the office goers,” the secretary said.

The visitors are advised to come in formal dress.

The road around the National Memorial Choeten will be closed for traffic until the end of the event (Refer route map) .

Thimphu traffic division’s superintendent of police (SP), Yeshay T Phuntsho, said that all residents in the area are requested to collect the permit card from the Traffic office in Lungtenzampa. 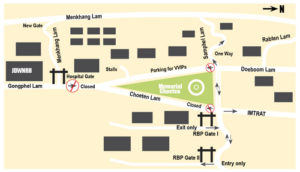 complex towards the IMTRAT, national referral hospital, and Lungtenzampa, will be open for two-way traffic.

Yeshay T Phuntsho said that the lower gate (near the fuel depot) of the Royal Bhutan Police Headquarters would only be for entry of vehicles, while the upper gate (just below the National Memorial Choeten) would be used for exit.

The vehicles moving towards national referral hospital will be diverted from choeten junction through Samphel Lam to Kalabazar ring road.

Yeshay T Phuntsho said that there will be a change in the direction of vehicle movement along Samphel Lam. “The vehicles will be allowed to move only upward towards Kalabazar ring road.”

Some length of the road divider along the expressway near the diesel powerhouse in Changzamtok will be removed to allow vehicles to take a U-turn from the expressway towards Kuensel for the convenience of the residents, students and employers in the area.

“We urge people to use city bus for transportation and pool  cars to decongest vehicular traffic during the event,” Yeshay T Phuntsho said.