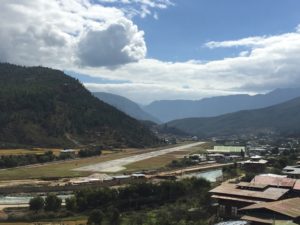 Service: The Department of Air Transport (DAT) with the information and communications ministry will install a new taxi counter at the Paro International Airport’s arrival terminal starting next month.

The decision to have a pre-paid taxi service at the only international airport in the country is based on customer feedback.

DAT director Karma Wangchuk said that the department is constantly trying to improve services at the airport based on customer feedback.

Customers complained that the taxi drivers at the airport overcharge foreign guests.

Karma Wangchuk pointed out that in the current scenario, taxi drivers rush for passengers and it is a hassle.

“One of the main reasons for having a pre-paid taxi service is to streamline the system and for the convenience and safety of passengers,” Karma Wangchuk said. “The rates charged will be approved by the RSTA.”

Karma Wangchuk said that USD Enterprise has been selected through an open tender to operate and manage the taxi counter at the airport.

After July this year, the taxi counter will be updated to an automatic parking fee collection service, established as per the international airport standards.

“We have tendered out the work to construct a parallel taxi way and international cargo terminal at the airport,” he said. “We are trying to increase the facilities at the airport.”

Karma Wangchuk pointed out that people tend to park their cars wherever and whenever they like and congest the parking spaces at the airport.

The parking fees differ from zone to zone.

Karma Wangchuk said that prime parking areas will be charged higher and people who require the parking space in the prime areas will pay and use the space.

A designated parking space for the crew in zone three is free for crew members, while zone four is designated for airport staff. However, overnight parking is not permitted in zone four.

People who wish to park their vehicles overnight at the airport can park at zone three. Nu 200 per night will be charged for all types of vehicles.

Karma Wangchuk said that establishing a taxi counter and charging parking fees is expected to ease the traffic flow in Paro.