Of Lomba celebration and miraculous mural

You are here: Home » Blog » News » Of Lomba celebration and miraculous mural

It is a special moment for people in Wangtsa village in Haa. The whole community gathered in the village Lhakhang by 9am to witness the local festival called Wangtsa Goencham. 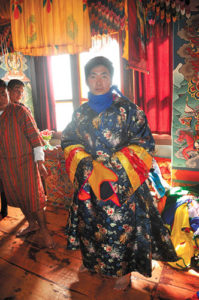 A prominent village resident, Wangcha Sangey, says: “This is one of the best ways of keeping the community united.”

There are three sacred masked dances that have to be performed by five families. The 75-year-old Penjor is one of them.

Penjor’s grandson, Yonten Jamtsho, is an RTC graduate. Wearing the Zhana (black hat dance) costume, he is preparing his entry to the courtyard of the lhakhang. “I started performing the dance since I was in class X,” he says. Most dancers in the village are youth like him. The oldest, who guides them, is a 40-year-old. “Since I have been doing it for the last 10 year, I don’t need practice.”

Wangtsa Goencham is a part of Lomba celebration in the village. Village people who are civil servants in other dzongkhags makes it more special by contributing funds to organise a tokha for the whole village. Free lottery tickets are distributed among the people at the festival.

Significance of the tradition dates back to the time of 9th Je Khenpo shakya Rinchen. The 25th Je Khenpo Sherub Gyeltshen (1772-1848), is thought to have built a small temple in the village and the structure was later enhanced by 36th Je Khenpo Yonten Pelzang (1869–1873).

In 2011, earthquake destroyed the lhakhang and rebuilding project began in 2013.

Phub Doley, a villager, said that all the structure was totally damaged everything had to be dismantled. New walls were raised. Miraculously, though, from the new mud wall, a mural of Je Khenpo Sherab Gyeltshen emerged naturally.

“The wall that was brought down has mural of Guru Tshengye,” said Phub Doley.

The mural looks ancient and pixelated, but the picture of Je Sherub Gyeltshen is clear enough. Certainly, it doesn’t look like a work of a human hand. A new thangka depicting the same mural picture covers the mural today.