You are here: Home » Blog » News » Our Gyalsey is Special 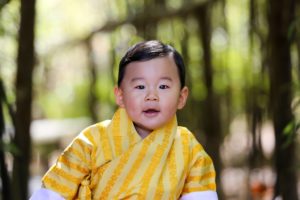 The Nation’s Son His Royal Highness Gyalsey Jigme Namgyel Wangchuck is one year old  tomorrow. On this same day last year, the Kingdom experienced enormous joy and happiness with the birth of The Gyalsey. It was a defining moment for the Bhutanese people, for our hopes and aspirations in the continuation of the Wangchuck Dynasty, which is the heart and soul of Drukyul’s peace, security and prosperity.

Each time our Gyalsey made a public appearance during the past one year, people from all walks of life were full of admiration and love. But each time the Bhutanese also witnessed maturity in our Gyalsey. 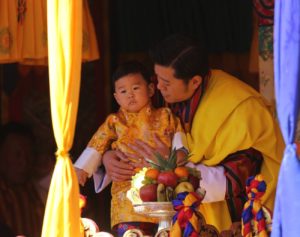 Our Gyalsey arrived with great tendrel at a time when Drukyul is passing through an era of unprecedented peace and tranquility achieved through the selfless and dedicated service of His beloved father The Druk Gyalpo and His Grandfather The Great Fourth Druk Gyalpo.

In Punakha Dzong, on the April 16, 2016, a cloudy day was greeted with bright sunlight the moment the Gyalsey was introduced to the crowd by His Majesty The Druk Gyalpo with His Name.

The 109th National Day celebrations at Trongsa, our Gyalsey’s first National Day, was most memorable with the presence of three generations of the Wangchuck Dynasty. However, the auspicious event that occurred the following day on November 18, during a tokha by His Majesty The King to those involved in various programmes for the celebrations, is worth placing on record. 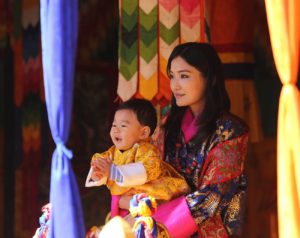 Our Gyalsey delivered his first public speech on that day by uttering a word aloud, in obedience to His Yab, when His Majesty asked Him to say something by placing the mike in front of him. The crowd applauded in disbelief. The moment was also seized with breathtaking sights of hundreds of crows hovering above in circles for a long duration. One may interpret that our Gyalsey is well protected by the local deities.

His Majesty reminded us time and again that The Gyalsey’s mission in life is to serve the people and the country. During the naming tendrel of HRH The Gyalsey on April 16, 2016 at Pungtang Dewachenpoi Phodrang, His Majesty The Druk Gyalpo said: “When the time comes for Gyalsey Jigme Namgyel Wangchuck to serve His country, He must always place the concerns of His country above all else and serve His people justly with great love and dedications. It will be His sacred responsibility to build a harmonious and just society, and thereby, fulfill all the aspirations of His people.”

It’s a collective responsibility of all Bhutanese to bring up our Gyalsey well. Therefore, let His Majesty The Druk Gyalpo, Her Majesty The Gyeltsuen and HRH The Gyalsey be in the prayers of every Bhutanese, wishing them good health and long life.