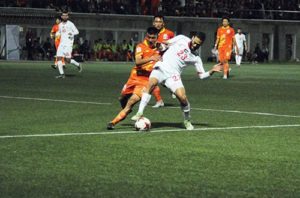 The national squad put up a brave fight against Palestine, who remain undefeated in the AFC Asian Cup qualifier, at the Changlimithang Stadium yesterday.

However, a goal each in the early second half and the dying minutes of the match sealed the nine points for the visitors.

After missing several chances in the first half, Palestine’s forward Yaser Islame, who scored the second goal against Oman, scored the opener in the 51st minute. Palestine skipper Abdallatif Albahdari doubled the lead in 95th minute. 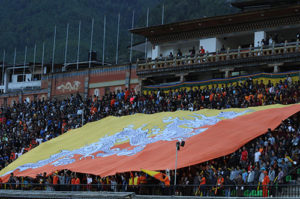 The opener of the away team changed the situation on the pitch. While the away team positioned to defend the opener, the national team stepped up the pressure to find an equaliser. This gave Palestine a tough time in the defense line as Bhutan created several chances from winning corner and free kicks.

In the post match press conference, Palestine coach, Abdel Nasser Barakat said that his boys lost confidence in the first half after missing several chances. 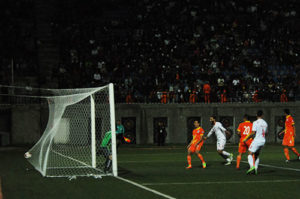 “It was a tough game for us as we made several mistakes. Bhutan played a very good game. If we had scored in the first half, the result could have been bigger than this,” he said.

The early goal in the second half was needed, he said. “The goal gave us confidence. I told my boys to be calm and forget about the first half. Despite many opportunities missed and the mistakes made, the most important thing is we scored and got the three points. This is important for us,” said the coach.

The pressure for an equaliser from Bhutan gave the defense of opponent team a tough time in clearing the ball. 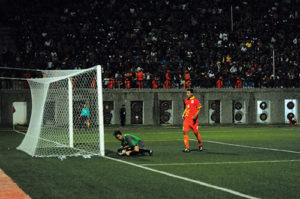 Bhutan’s opportunities to equalise came in the 76th minute while the skipper Karma Shedrup Tshering blocked the clearance of Palestine’s defender but failed to complete the one on one opportunity in the penalty area.

Among numerous chances missed for Bhutan in the second half, the best chance came in 81st minute while Palestinian defender failed to mark striker Chencho Gyeltshen. However, Chencho’s close header from the corner kick ended few inches away from the goal bar.

Karma Shedrup Tshering and a Palestine player were given yellow cards. 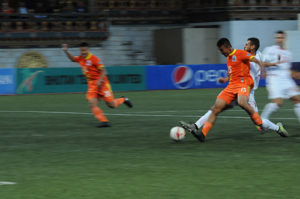 “In the beginning we played a respectful and nervous game but in second half we showed a very good spirit. I told the players before to keep the ball low as we are of smaller team. It took whole first half to make the boys play ground ball. We created several chances and pressured them as we started to pass the ball,” he said. 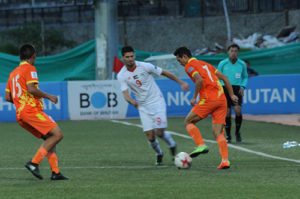 “I am still not satisfied with what the players did in the game. We can do better and with the performance in second half I am confident that the boys will play the same from the beginning next time. Most of the Palestine players are professional. We can see the difference in speed and physical ability but anyhow we were to keep the ball on the ground and play the pass,” said the coach.

The first ever play off between Bhutan and Palestine gathered around 30,800 spectators who cheered the much-improved squad.

Bhutan will play the away game with the same team on October 10 in Palestine before facing Oman and the Maldives in the qualifier.