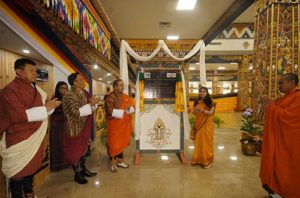 The structures were part of a project worth about Nu 800M funded by the Government of India. The project began in the 11th Plan.

With the modified departure terminal building, the airport is expected to accommodate about 720 passengers, twice the capacity of the previous building.

Department of Air Transport’s director, Karma Wangchuk, said that the old terminal building had just one departure gate. The new one has three.

“The departure terminal building will be operational within this week. For the parallel taxiway, we are processing for certification of the taxiway way with the civil aviation authority,” Karma Wangchuk said.

The substation at the airport was relocated to create more space for vehicle parking.

“Now we have ample room and have enough capacity for another 30 years. We should be quite comfortable. We still have more room for expansion. We are concentrating on the safety, standards, and services today,” Karma Wangchuk said.

The aviation industry today employs more than a 1,000 people.

The ceremony was part of the celebration of the 50 years of diplomatic relations between India and Bhutan.