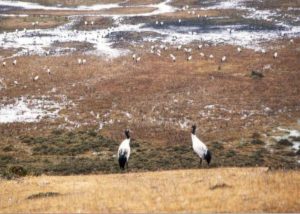 A majority of Phobjikha residents support conservation of black-necked cranes.

A graduate from the College of Natural Resources, Jigme Wangchuk shared his findings at the fourth annual research symposium organised by Bhutan Ecological Society on December 2.

Black-necked crane is the only alpine crane species and is classified as vulnerable under the International Union for Conservation of Nature. There are about 11,000 cranes around the world according to World Wildlife Fund.

Jigme Wangchuk said conservation efforts did not have much impact on people and that people had access to basic developmental amenities such as access to farm roads, schools, and basic health unit.  “There was no restriction on farming practices due to conservation efforts. People are free to use agro chemicals and any kind of techniques for farming.”

However, only seven percent agreed to chemical free farming while 41 percent disagreed.

The chemicals are mainly used to kill the potato plants for easier harvesting.

The study also found that 12 percent felt access to electricity was severe as they faced irregularities in power supply due to underground electric circuit fitting. “About 13 percent of respondents felt restriction on their mobility,” Jigme Wangchuk said.