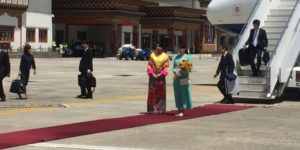 Her Imperial Highness is visiting Bhutan on the invitation of His Majesty from June 1 to 7.

Princess Mako, 25, is the eldest grand-daughter of Emperor Akihito and Empress Michiko.

While in the country, Her Imperial Highness will grace the opening of the third Royal Bhutan Flower Exhibition at the National Memorial Choeten in Thimphu.