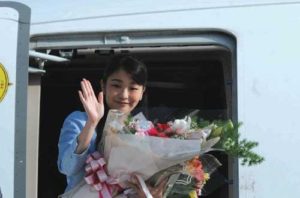 Her Imperial Highness Princess Mako of Akishino of Japan concluded her eight-day state visit to Bhutan and returned to Japan yesterday.

Princess Mako played archery and khuru during the final of the Jigme Dorji Wangchuck Memorial National Championship on traditional bow at the Changlimithang on June 3.

The 25-year-old Princess impressed the crowd consisting mostly of students by appearing in a kira, the traditional Bhutanese costume for women. His Majesty The Fourth Druk Gyalpo had gifted the kira to her parents, Prince Fumihito and Princess Kiko, who visited the country 20 years ago.

The Princess wore a yellow kimono with embroidered pine trees, plum blossoms and chrysanthemums for the audience with His Majesty The King at the Trashichhodzong.

Princess Mako wore an aquamarine kimono for the reception hosted by the Japanese Ambassador to Bhutan Kenji Hiramatsu that was attended by Her Royal Highness Princess Eeuphelma Choden Wangchuck and Bhutanese government officials.

Speaking at the event, HIH Princess thanked His Majesty The King and Her Majesty The Queen, who were the first state guests after the disaster, for visiting Japan after the Great Eastern Earthquake in 2011 and for showing solidarity with the Japanese people.

The Princess passed on a message from Emperor Akihito in which he expressed his hope that the goodwill between Japan and Bhutan would further progress, a Japanese media reported.

The Princess was the special guest at the inaugural of the third Royal Bhutan Flower Exhibition on June 4, which also had a Japanese garden.

The Princess attended the opening of the Japan Week 2017 which was an event co-sponsored by the Japanese Embassy to introduce various aspects of Japanese culture to Bhutan.

On the last two days of her visit, Princess Mako visited the Dasho Keiji Nishioka museum and a farmhouse in Paro.

Japan and Bhutan marked the 30th anniversary of their diplomatic relations last year.