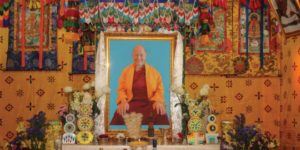 Thousands of devotees and well-wishers flock to Taba in Thimphu everyday to offer their last respects to the kudung (precious body) of Khenpo Karpo.

Khenpo’s body arrived in the country on January 27 after completion of a deep meditative state (Thukdam).

Khenpo Karpo’s disciple, Khenpo Gyeltshen, said that Khenpo remained in meditative state for five days in Bangkok where he passed away in the early hours of January 19.

The Ugyen Dongag Yoesel Chholing monastery, where Khenpo Karpo spent his later part of his life, was established by Khenpo himself.

The purjang ceremony of Khenpo, which will be presided over by His Eminence Dzongsar Jamyang Khentse Rinpoche, will be held on June 9 in Takila.

On February 5, the kudung will reach Rongthung in Kanglung, Trashingang. Devotees can pay their respects to Khenpo’s kudung at the Lengkhar resort. Hundreds of people from Kanglung, Yonphula, Rongthung and nearby villages are also expected to turn up along the roadside to pay their respects.

On February 6, the kudung will be hosted a night at Kadam Goenpa in Mongar, which is one of the oldest monasteries in the east that upholds Dudjom Tersar lineage (New treasure).

From Mongar, the kudung will be escorted to Pelphu Drubdra in Zhongmed where Khenpo Karpo was born. There the kudung will remain for three days where prayers and rituals will also be held.

Many Bhutanese and people from outside Bhutan had great reverence for Khenpo Karpo who built the giant bronze statue of Guru Nangsey Zilneon in Tangmachu, Lhuenste. The 157-foot statue, which was completed at a cost of Nu 700 million, is one of the tallest Guru statues in the world.

Following completion of the statue, Khenpo Karpo organised Rinchen Terdzo empowerment (the Treasury of Precious Termas) at Takila where thousands of people attended.

Khenpo Karpo is also the founder of the Druk Odiyana Foundation, which has thousands of members all over the world.

In 1970, he was given the title of Khenpo and was considered the heart son of both HH Dudjom Rinpoche and Dzogchen Ponlo Khenpo Rinpoche. Khenpo received profound teachings from great masters such as Chatral Rinpoche, Minling Trichen Rinpoche and Penor Rinpoche and was recognised as an eminent teacher of the Dudjom Tersar Lineage.

On the spiritual advice of HH Dudjom Rinpoche and Dzogchen Polo Rinpoche, Khenpo Karpo founded the Palphu Retreat Centre in Zhongmed, Lhuentse, in 1992, which today has 51 monks.