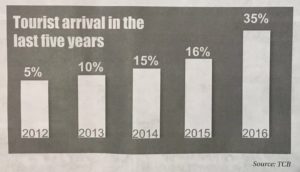 Tourist arrivals shot up 35 percent last year, compared to the previous high of 16 percent in 2015, which was the highest growth percentage in the last five years, according to the recently released Bhutan Tourism Monitor 2016.

More than half the international tourists (56.1 percent) were from the Asia and Pacific region followed by Europe and North America at 26 and 16 percent.

Chinese tourists again dominated international arrivals at 17 percent of the total visitors, followed by the United States and Japan at 13 and nine percent. With Thailand and UK, it makes up the top five markets.

However, the number of China visitors fell by 2.07 percent from the previous year while there was growth in visitors from the rest of the top five international markets.

Singapore, Germany, Malaysia, Australia and Taiwan together made up the top 10 markets.

Female visitors made up the majority with 60 percent.

Regional visitors constituted 70 percent of all arrivals to Bhutan, of which, 69 percent arrived over land.

Most regional tourists visited the country in May, October, December and June, following a similar pattern of 2015.

The tourism monitor states that there was high number of international arrivals during the summer season. “It could be attributed mainly due to the Bhutan-Japan Friendship offer commemorating more than three decades of diplomatic relationship between the two countries,” the report stated.

Meanwhile, visitors tend to prefer Spring and Autumn to visit the country, a trend that has continued over the past five years.

Income from an international leisure tourist, which constitutes 84 percent of the total arrivals last year increased to USD 73.74 million (M), which was an increase of four percent from 2015. Of the total gross earnings, USD 20.28M constitute royalty or sustainable development fee contribution to the government.

The tourism monitor states that in 2016, a majority of international leisure travels visited Bhutan for culture sightseeing and related activities. “Cultural related activities include tshechu and festivals, visiting dzongs and monuments, experiencing Bhutanese ways of life,” the report stated.

Paro and Thimphu had almost equal number of visitors, amounting to 27 and 26 percent respectively, followed by Punakha at 22 percent.