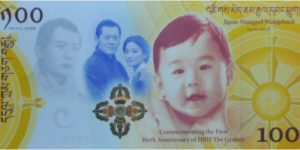 Currency: To celebrate the first birth anniversary of His Royal Highness The Gyalsey, Jigme Namgyel Wangchuck, the Royal Monetary Authority (RMA) will be printing 1 million commemorative notes of Nu 100 denomination this year.

The chairman of the Royal Privy Council, Lyonpo Chenkyap Dorji launched the design of the commemorative banknote yesterday.

While work to print the commemorative notes began in June last year, the RMA will issue the notes later this year. An official from Orell Fissli, a Swiss based printing company assigned with task said that printing would be completed by September this year.

RMA governor Dasho Penjore said the plan is to come up with four series of the commemorative note, all meant for different occasions.

Dasho Penjore said that the obverse of the commemorative Nu 100 note depicts the country riding on the dynamism of His Majesty The Fourth Druk Gyalpo and His Majesty The King along with birth of His Royal Highness The Gyalsey.

The reverse of the note has mountains and glacial lakes with a dragon superimposed upon it. “This depicts Bhutan’s endowment to the environment,” Dasho Penjore said.

The note bears the message “Commemorating the First Birth Anniversary of HRH The Gyalsey”. A combination of the national colors, yellow and orange have been used. Several enhanced security features are also included.