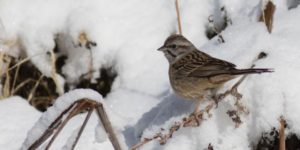 Godlewski’s bunting () is the latest addition to Bhutan’s avian biodiversity.

“Off to Bhutan,” a birding and birdwatching company’s guide, Norbu, with a group of tourists comprising of biologists from Victoria, Canada discovered the Godlewski’s Bunting recently. The group recorded the bird near Tharpaling monastery.

Norbu had led his guests to Tharpaling monastery to observe the Himalayan Monal () where it can be easily spotted.

One of the biologists, Claudia Copley, emailed that when the bird was first spotted, its identity was unclear since most of the watchers, save for Norbu, did not possess much knowledge about birds. However, Norbu took several photographs of the bird.

“Upon examination later on the bus and after much discussion, it was concluded that the bird was a new record for Bhutan,” Claudia Copley said.

They then checked its identity with Ugyen Wangchuck Institute for Conservation and Environment ornithologist, Sherub. “We crossed checked with Sherub who told us that the bird wasn’t recorded before and is a new find,” Norbu said.

Sherub said it is the westernmost sighting at least in Bhutan. “So far it was found only in Arunachal Pradesh in India and China,” Sherub said.

As per the International Union for Conservation of Nature, Godlewski’s bunting is found in China, India, Mongolia, Myanmar and Russia. The bird is recorded in Bhutan for the first time.

That year, the Beautiful Sibia () and Brown Accentor () were also discovered after the country recorded the Common Moorhen () and Burmese Shrike () in January and April respectively. In two years, Bhutan recorded 10 new bird species.