According to the biographical notes in the History of Bhutan, Thangtong Gyalpo erected a bridge across the Paro Chhu (sPa gro chu) to Tamchog (gTam chos) by 1433. The successors of the first Chakzampa built a Lhakhang at Tamchog, the Tamchog Gonpa (gTam chos dgon pa). In 1969, the iron suspension bridge was destroyed by high water. The chains were partly rescued and kept in the attic of the shed behind the Lhakhang. According to the oral tradition, even other chain parts are supposed to lie buried in the riverbed below stones and sand. To ensure the access to the Tamchog Lhakhang across the swift moving Paro Chhu, a suspension bridge was built from cable ropes after 1969.

As per the royal wish of His Majesty King Jigme Singye Wangchuck, the Ministry of Works and Human Settlements had in 2005, the cable rope suspension bridge again substituted with an iron chain bridge. The foundations of the bridge on both riverbanks, i.e. the bridgeheads bear stately gate superstructures, which is set up so highly that practically no more danger exists through high water. The iron chains used are historical without exception from different places. Some of them are the secured chains of Tamchog itself, four chains are supposedly to originate from Doksum and some from Tashigang.

The soil of the hill on which the Tamchog Gonpa stands, is coloured red by the strong iron content. We can also see metalliferous lodes on the towering rock behind the Gonpa. We could also discover several ‘mouthpieces’ of ore tunnels further up on top of the mountain. 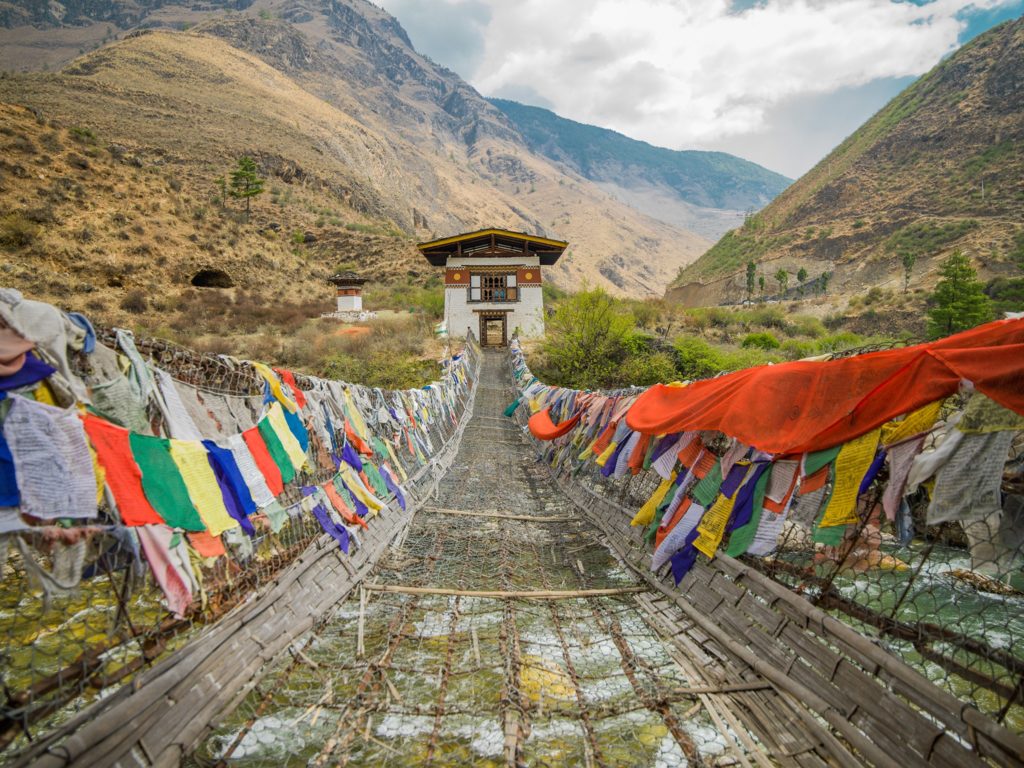 However, legend also knows different ways about how the wrought iron reached to this place. Thangtong Gyalpo, while visiting Wang Dhalukha in Thimphu, not far from the village of Genekha, which in the literature is known for its rich iron ore deposits, found rich iron ores. He is said to have requested the residents for those ores, and they offered all iron with a belief that he would not be in a position to transport everything available. However, with supernatural powers the Drubthop is said to have thrown the iron up in the air and landed in Chags, above the Tamchog Gonpa. He is then said to have used his knee as an anvil and forged two bridges in one day from the iron, i.e. one for Tamchog Gonpa and the other one, Chaze Chakzam, which was erected only a few kilometres downstream.

Source: The Centre for Bhutan Studies