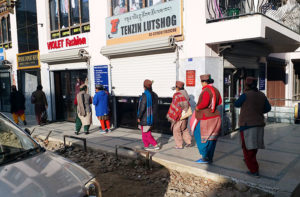 The Tourism Council of Bhutan (TCB) has come up with a draft strategy to address the issue of mass tourism, foreign minister Dr Tandi Dorji said at a press conference last week.

Lyonpo, who is also the chairman of the third tourism council, said the issue has also been discussed in the cabinet. “The Prime Minister has repeatedly asked us to work on this.”

The minister said that the issue was not about regional tourists. “For us, rather than the mass regional tourism that is being mentioned, the concern is on Bhutan’s high value policy being undermined and Bhutan being sold as a budget destination. This is the major concern for us,” he said.

According to the records of the former prime minister’s meeting with the Indian prime minister, lyonpo Dr Tandi Dorji said that discussions from both sides mentioned that Bhutan should take measures to control the number of tourists coming in so that they could be handled.

Some of the options in the draft strategy include capping tourist numbers, introducing daily tariffs as recommended by the Pay Commission, and ensuring that the policy of high value and low impact is maintained by having a certain mechanism in place for tourists to follow such as staying in standard hotels, and guided tours among others. “I assure you that as the chairperson of the tourism council, we are doing everything,” lyonpo said.

“Regional tourism has been making a significant contribution to the development of the tourism industry in terms of revenue generation,” he said. However, he said that due to its unregulated nature, the number of undesirable impacts is also being felt.

Some of them include undermining the time-tested tourism policy of high value, low volume, thereby risking the image of Bhutan as an exclusive high-end travel destination. “This is due to the unregulated nature of regional tourism which unfortunately gives a wrong image of an unorganised and mismanaged tourism,” he said.

The other undesirable impacts include compromising the safety, security, and experience of the regional tourists, contributing to the practice of undercutting, giving rise to informal and unlicensed accommodation facilities and other platforms.

He said there is pressure on carrying capacity of services and resources. “There is a seemingly growing resentment towards this overcrowding caused by unregulated tourism.”

It also affects the quality of people to people exchange, he said. Tourists, he said, are not aware of certain sensitive cultural and traditional practices and etiquette and not having any locals to guide them lead to developing negative opinions on regional tourists.

Dorji Dhradhul also clarified that all regional tourists are not backpackers and low-end as most tend to wrongly believe.

“We are in no way and in any way saying that we don’t want regional tourist. It is in our interest and advantage that we capitalise on the potential of regional tourism. We know that outbound tourism from these regions is on the rise,” he said. “What we are saying is that we need to manage this important sector of tourism through some regulations for the mutual benefit of the tourist themselves and for us, the host.” he said.

To start with, the council is expected to have some regulations in place for proper management of regional tourism.

“We also hope to do away with the two categories of tourists we have as of today in due course of time. Any visitor or guest coming into the country will be labelled as tourist regardless of their place of origin,” he said. “It is our desire that we treat all tourists as our guest and give them the best and exclusive experience.”

On concerns raised in the media including social media forums about not getting hotel rooms for dollar paying tourists and crowding at heritage sites, Dorji Dhradhul said the claim may not be true for hotel rooms.

However, he said that overcrowding at heritage sites is true and happening. “Maybe we have already reached the saturation point. If we don’t take remedial action soon, the risk on our exclusivity driven by the high value, low volume tourism policy is real.”

Officials with Hotel and Restaurant Association of Bhutan were not available for comments.