Thangtong Gyalpo – the Great Bridge Builder of the Himalayas

You are here: Home » Blog » News » Thangtong Gyalpo – the Great Bridge Builder of the Himalayas 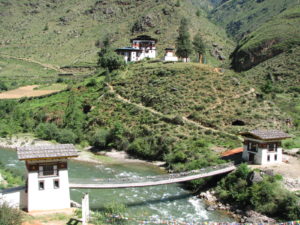 Although many accomplished Buddhist yogis have lived and meditated in Bhutan over the centuries, none, perhaps, have left such a visual and practical legacy as Thangtong Gyalpo. Known as Chakzampa (the Bridge Builder), he was born in the latter part of the 14th century in Upper Tsang, Tibet.

Thangtong Gyalpo was a colourful and hugely unconventional figure, and right from the very beginning his life was highly symbolic and cloaked in mystery. Generally, it is reported that the great yogi spent sixty years in his mother’s womb contemplating the well-being of sentient beings. Finally, it is claimed, he came to realize that while he had fully devoted his prayers and thoughts to the welfare of all sentient beings, he had neglected the well-being of his own mother. He consequently entered the world at the end of his 60th year – already an old, but robust man, complete with white hair and long beard.  As Thangtong Gyalpo is always depicted in this guise, he naturally came to symbolize long life, and consequently his image is commonly used as an aid to practices associated with longevity.

Thangtong Gyalpo’s life was as unconventional as his birth, and he would as readily feast on the rotting corpse of a long-dead animal as on some delicacy.  While such acts might seem improbable we should remember that Thangtong Gyalpo was no ordinary man, but a being who had realized the nature of self and phenomena. As such, he fully understood that all phenomena are intrinsically pure and that it is our conditioning that creates discriminations.

While such a concept might initially sound strange, it is not so if we consider it logically. Take, for example, a broken cup. To a person with a fixed concept of a cup it is a less than perfect item. However, to a person with no preconceived idea of a cup and who has no idea of its conventional use, both a whole and broken cup are equally perfect. Likewise, a butterfly or other insect is as happy to rest on one as the other. From this simple example, we understand that imperfection arises from the mind and is not intrinsic to the object itself. While many people might grasp this concept intellectually, great yogis like Thangtong Gyalpo have realized it at a heart-level.  As a result, they live in a way that is free of the social restraints and prejudices that usually dictate a person’s thought and action.

Although there is no doubt that the lives of these yogis express the highest wisdom, a person who eats the rotten flesh of an animal or rides horseback into a shrine room – another common activity of Thangtong Gyalpo – may  appear crazy or wild to most people. This was true for the great yogi, and he was once thrown overboard by a ferryman who perhaps felt that the crazy looking man with flowing white beard and long hair may endanger the craft or its passengers.

Rather than being offended by the rejection, his extensive meditation on the compassionate Bodhisattva Avalokiteśvara transformed the incident into a clear vision of a practical way to benefit beings and spread the teachings of the Buddha Dharma[i] – to construct iron chain suspension bridges that spanned rivers and allowed pilgrims safe and easy access to sacred sites. To bring this vision to reality would be no mean feat, however, and among other things the great yogi would need to learn metallurgy, study engineering and raise funds to purchase the iron ore and pay labour costs.

To raise the necessary funds he brought his creative talents into play and established Tibet’s first opera. The troupe would travel the country performing operas that would teach the Buddha Dharma and recite mantras that subdued negative forces.

From the income generated by the performances and through the generosity of patrons, he was successful in raising sufficient funds to start building bridges at prominent places in Tibet, the first being over the Kyichu River near Lhasa in 1430. [ii]

In order to seek more iron ore for his bridge construction operations, Thangtong Gyalpo visited Bhutan for the first time in 1433. He stayed at Taktsang Monastery, where he revealed a hidden treasure teaching, made supplications at temples in the Paro Valley and constructed a small chorten[iii] at Dzondrak Gompa.[iv] In addition, he constructed a chorten-shaped monastery in the middle of the Paro Valley called Dumtseg Lhakhang.[v] After completion of this structure he declared that the valley would hence-forth be free of leprosy.

As ferry connections were not possible in most parts of Bhutan due to the precipitous gorges and fast flowing rivers, the country was in even more need of bridges than Tibet. Consequently, the great yogi wasted no time in seeking iron ore and hiring blacksmiths who could assist him in his task of bridge building.

His first endeavour traversed the Paro Chhu and offered convenient access to a lhakhang that he himself established (Tachog Lhakhang Dzong). Although the original bridge was washed away in floods in 1969, some of the original links as well as iron from other bridges constructed by Thangtong Gyalpo were used to erect a replacement bridge in 2005. This bridge is located opposite the road from Paro, about 5km before the Chuzom check post, and can be clearly seen by travellers heading towards Thimphu.

From Paro, the great yogi travelled north to Wangdue Phodrang, where he received a donation of 250 pieces of iron from a local lama and constructed a bridge near Hesothangkha Village.

During his second visit to Bhutan in the 1440s, Thangtong Gyalpo visited the eastern part of the country, where his first construction was a 100 metre bridge below the present-day Tashigang Dzong. Later, bridges at Doksum in Tashigang, Dagme in Mongar and at Khoma in Lhuentse District were added.

Altogether, it is claimed that the great yogi constructed 58 suspension bridges throughout the Himalayan region, of which eight of these were located in Bhutan. Currently, the following four still exist and offer passage to pedestrians: Tachog Chakzam, Doksum Chakzam, Dangme Chakzam and  Khoma Chakzam.

While Thangtong Gyalpo’s entire life was an offering to the well-being of sentient beings, we might like to ponder what was his most significant and enduring legacy for the people of the Himalayas.  Was it the bridges that spanned fast flowing rivers and safely carried pedestrians for 500 years or more or perhaps the colourful and symbolically rich operatic performances that have been passed down through generations? While these feats were undoubtedly remarkable achievements for the 15th century, a Buddhist adept will be aware that the elements and conditions that temporarily bind together to create material goods and produce events will one day dissipate and disappear. Consequently, he will know that in the future the bridges will collapse and that one day the theatrical performances will be consigned to the world of academics. In this respect, their benefit is limited by time and space. Furthermore, infrastructure developments, such as bridges, can only provide convenience. They cannot bring wisdom to a confused mind nor can they eliminate the suffering caused by greed and aggression.

In this respect, Thangtong Gyalpo’s greatest legacy was not his expertise as an engineer, choreographer or even his ability to eradicate disease, but his skill at spreading the highest and timeless wisdom of the Buddha beyond the monastery walls. Unlike most other high lamas of the day, he was not limited to bestowing blessings from a high throne. Instead, his bridge building activities and opera performances enabled him to gain audience with wealthy patrons as well as to rub shoulders with humble blacksmiths and labours. In this way, the teachings of the Dharma were able to permeate deep into the fabric of society.

Even today, the teachings of the great yogi are alive in the Himalayan area – preserved not only by mind to mind transmissions and oral accounts of his great feats, but also by a continuous and unbroken line of incarnations of Thangtong Gyalpo. At present, the Zilukha Nunnery housed in the Drubthob Gompa in Thimphu provides the current seat of the 17th incarnation, and the connection with the Thangtong Gyalpo lineage is immediately apparent by the several metre high gilt statue of the yogi in the main shrine room. In addition, the nunnery also owns several thangkas with representations of the first Thangtong Gyalpo.

Unquestionably, the Chakzampa was a visionary and a man before his time, but first and foremost he was a man of the Dharma – using expedient means to touch the lives of others, he was able to lead people of all walks of life onto the sacred path of the Buddha.

[i]  Dharma (also spelled Dhamma) –  the teachings of the Buddha

[ii]  This was about four centuries before iron suspension bridges were built in the west.

[iv] Gompa (also spelled goenpa) – a monastery that often consists of several temples and a monastic body. It serves as a place for meditation and commonly offers monastic education. It further functions as a place for the lay community to make offerings.

[v] Lhakhang  – a single structure with one caretaker, not always a monk. it primarily functions as a place for the lay community to make offerings and to perform rituals