The last surviving potter of Gangzur

You are here: Home » Blog » News » The last surviving potter of Gangzur

Pottery making, one of Bhutan’s traditional crafts, is on the verge of extinction. In Gangzur in Lhuentse, the fate of this ancient tradition rest in the hands of Tshewang Choden.

60-year-old Tshewang Choden is the last surviving potters in Gangzur, a village that was once known for pottery making.

Tshewang Choden began learning the art of pottery making at the age of 13 from her mother. “It earns me good money but making earthen pots is not easy,” she says.

While a host of factors are being blamed for the gradual disappearance of the traditional craft, it is the sheer hard work that pottery making entails that is stripping the craft of its appeal.

“It’s hard work. The process is long and time consuming. You have to first collect clay, remove stones from it and then knead it into dough before shaping it into various pot designs. Finally, it has to be dried and this is most the challenging part because it is hard to get firewood.”

Tshewang takes most of the pots and other earthen wares that she makes for sale to Thimphu.

Gangzur Gup Kinzang Dorji is afraid that the traditional craft may not survive for long. 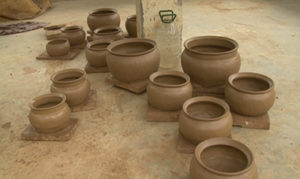 Lack of market for locally made earthen wares and competition from ready-made imports remain the biggest challenges to preserving the traditional craft.

In Gangzur, initiatives have been taken to ensure the survival of the art.

“There are over 20 households in Gangzur village and 16 of them formed a pottery group,” Gup Kinzang Dorji said.

But it wasn’t long before the members started quitting.

“Many gave up because it’s hard work. Tarayana Foundation still supports the earthen pottery house in the village. It would be great if the government could provide a clay crushing machine. I think this would reduce the drudgery in pottery making and would help revive interest in the craft,” the Gup added.

Tshewang Choden too is worried over the fate of pottery.

Her products sell well but she is sad that the ancient craft is dying a slow death with the younger generations not showing any interest in keeping the tradition alive.